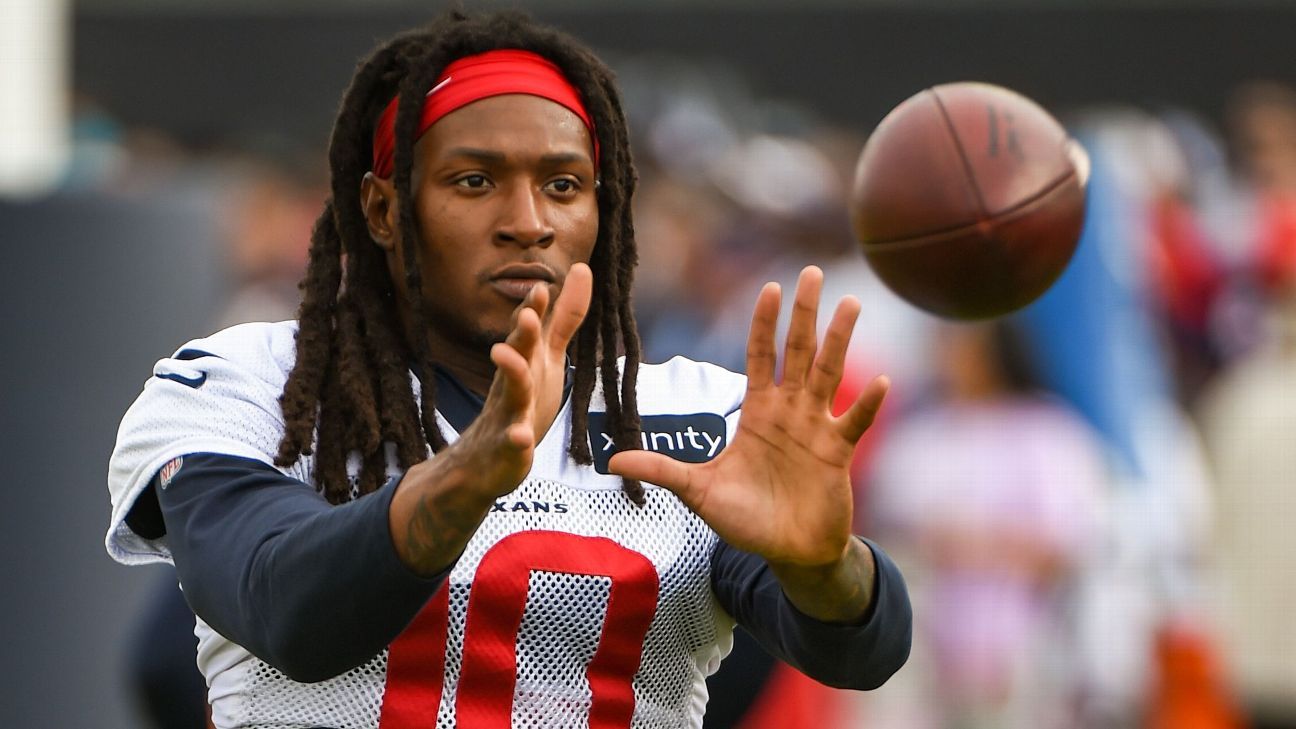 TEMPE, Ariz. — As new Arizona Cardinals receiver DeAndre Hopkins gets to know his quarterback, Kyler Murray, and they start building that ever-important chemistry, Hopkins says he can’t simply be teammates with Murray — they have to be as tight-knit as possible.

“My expectation is us becoming best friends and doing everything together, because I have to be on the same page as my quarterback no matter what for us to be successful as a team, not just him and I,” Hopkins said during a video conference call on Monday.

Hopkins has been around Murray in person for less than a week — they worked together, along with about 20 other teammates, for a few days in Dallas last month, and have been in Arizona the past couple of days. So he has been trying to speed up the process of building a rapport with Murray on and off field, which can sometimes take months, if not years.

That starts with communicating, Hopkins said. The two have been texting and talking on the phone, he said. Hopkins’ goal is to build a “camaraderie of something that is going to last for a long time, not just while we’re playing football, but after football.”

Hopkins expects more non-camp throwing sessions between Murray and the receivers when there’s free time, he said. Those will help build chemistry, he added.

Hopkins, who the Cardinals traded for in March, said Murray has been helping him learn the Cardinals’ offense.

“I think, obviously, he’s matured in this offense, and I’m new to it but he’s doing a good job of keeping me up to par with things and also the other guys around me,” Hopkins said. “But, I think we will have time to develop chemistry once we kind of get out there and throw a little bit more against the defense. I think that it’ll help.

“Obviously, we don’t have a lot of time to get ready. So, every rep really counts, but I think Kyler’s mindset is we’re gonna make it work. So, that’s my mindset, as well.”

Hopkins has been studying his playbook twice a day, he said, which has helped him absorb the scheme. He has been so immersed in studying the offense that his screensaver is made up of plays, he said.

“I think so far this offense is coming along well for me,” Hopkins said. “These guys are doing a good job of the way they teach. [Coach Kliff Kingsbury] is. He’s a great coach. He’s doing a good job of having everybody prepared for whatever happens.”

Hopkins has been impressed with the reigning rookie of the year so far.

“Kyler has an arm,” Hopkins said. “Obviously, I’m thankful to play with a quarterback like that that can make any throw anywhere on the field, and has confidence to throw.

“And just from what I’ve seen, we’re gonna have a good time playing football together because obviously he’s confident in his arm and the guy is very talented, very smart, high football IQ. But what I’m seeing so far is someone with a very strong arm.”

That bodes well for Hopkins in the Cardinals’ offense, which he has been told by teammates is “far advanced” at this point, more than it was a year ago. Hopkins is coming off three straight 1,000-yard seasons and believes his new scheme can help him stand out yet again.

“I think the offense is great for a receiver, for a skill player,” Hopkins said. “You can actually showcase your skill set in an offense like this, getting the ball and being able to make plays, but I think they do a good job already of getting playmakers the ball.”

As Hopkins continues to get to know Murray and the rest of his new teammates, he’s keeping an eye on how the coronavirus can impact the season. So far, Hopkins has been impressed with the protocol the NFL has in place. He thinks getting tested daily is a smart idea and said the coaching staff in Arizona has pushed hand washing in the facility in addition to the maintenance staff cleaning and sanitizing everything the players touch.

But as players around the league continue to opt out, Hopkins said he hasn’t had to think about it yet, but hasn’t ruled it out if it became a necessity.

“I play football for a living but I’m also a family man for a living,” he said. “And hopefully it doesn’t have to come to that but I take it day-by-day. I think in the present moment, not the future. So, I take things day-by-day, but seeing guys opt out, I see a lot of guys getting criticism for it and I feel bad for those guys because obviously they’re losing a lot of money by opting out, but to those people they don’t want to risk what can happen and you can’t blame them.

“But for myself, I take it day by day and I really don’t look past that.”