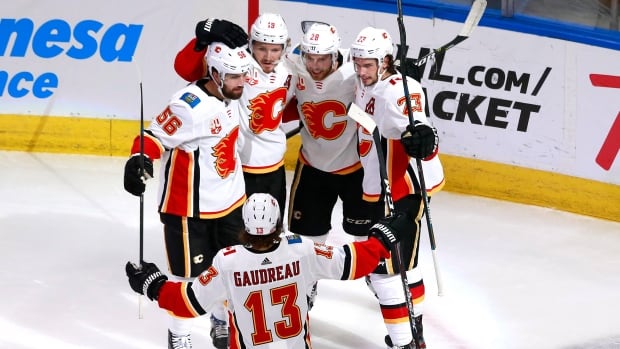 Calgary scored a trio of power-play goals on Tuesday en route to a 6-2 win over the Winnipeg Jets and a 2-1 lead in their qualifying series.

Sean Monahan led Calgary’s attack with a goal and two assists. Elias Lindholm and Mikael Backlund each scored and had an assist.

Matthew Tkachuk and Milan Lucic also scored, and Johnny Gaudreau produced an empty-netter to go along with a helper. Andrew Mangiapane had a pair of assists.

WATCH | Flames’ power-play heats up in Game 3 win over Jets:

Matthew Tkachuk was one of six Calgary skaters to tally in their 6-2 victory as they take a 2-1 series lead over Winnipeg. 1:11

Nikolaj Ehlers and Andrew Copp scored for the Jets.

The lower seed and thus the visiting team for the first two games of the series, Winnipeg was the home team Tuesday.

Playing their second game in as many days, and third in four, neither team asserted itself early. Calgary took control with a three-goal second period.

After scoring a pair of power-play goals in Game 1, the Flames had blanked on six chances Monday.

Scheifele hasn’t played since the first period of Saturday’s opener. He injured his left leg tangling along the boards with Calgary’s Matthew Tkachuk.

Attrition continued for the Jets on Tuesday. Forward Mathieu Perreault went to the dressing room in the second period and did not return. He was checked hard by Sam Bennett near Calgary’s bench.

Defenceman Tucker Poolman missed the majority of the second period. He leaked blood onto the ice after taking a Backlund shot off his head.

Poolman was back on the bench to start the third, however, wearing a cage until switching to a full shield.

With the Jets trailing 5-2, Hellebuyck was pulled with four and a half minutes to play in a bid for extra-attacker goals.

Lucic buried a rebound off a Dillon Dube shot for Calgary’s fifth goal and third with a man advantage at 8:28 of the third.

Mangiapane fed Tkachuk in the slot from behind the net at 12:48 of the second period.

Winnipeg had pulled within a goal at 8:09. Copp stepped out from behind the net and went backhand top corner for a power-play goal.

Monahan lost his helmet when he was pushed hard into the boards by Jansen Harkins. On Harkins’ resulting minor, Monahan chipped a wobbling puck over Hellebuyck’s stick on a broken play at 7:49.

Just 18 seconds after Ehlers’ goal at 10:04 of the first period, Lindholm pulled Calgary even with a power-play goal.

Lindholm redirected Erik Gustaffson’s pass over Hellebuyck’s glove for the Swede’s second goal of the series.

From behind Winnipeg’s goal-line, Dmitry Kulikov put a pass off the wall to Ehlers lurking at Calgary’s blue-line. Ehlers beat Talbot far side with a wrist shot.