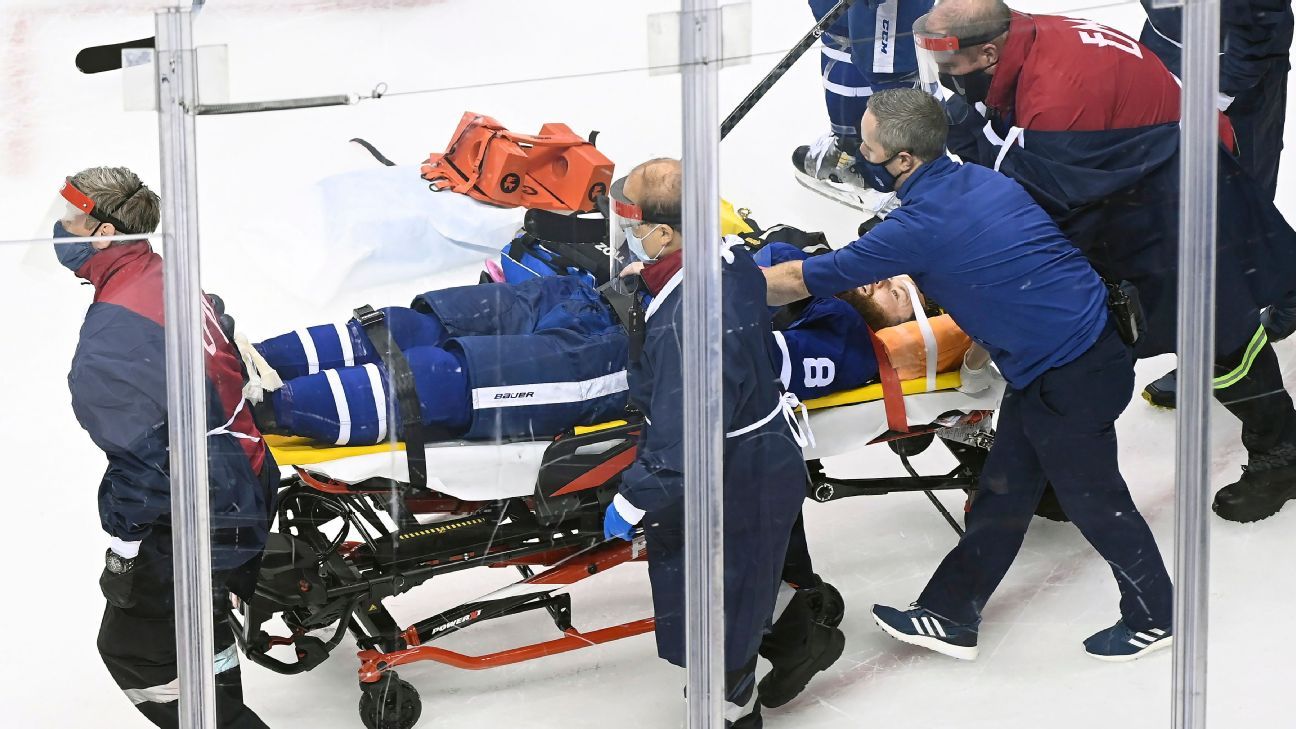 Toronto Maple Leafs defenseman Jake Muzzin was taken to the hospital following an on-ice collision during Tuesday’s qualifying round game against the Columbus Blue Jackets.

He is alert and able to move all of his limbs, the team announced, adding that further updates will be provided once available.

The collision occurred late in the third period of the Maple Leafs’ 3-0 win at Scotiabank Arena in Toronto. Muzzin was cross-checked by Blue Jackets forward Pierre-Luc Dubois, then took an awkward fall into the back of Blue Jackets forward Oliver Bjorkstrand‘s leg. Dubois was not called for a penalty on the play.

After attempting to stand up, Muzzin lay on the ice motionless for several minutes as medical personnel helped him onto a stretcher. The 31-year-old appeared to be moving his extremities when he was wheeled off.

“It was really hard to see him being told to lay down and not move,” Toronto goalie Frederik Andersen said.

Maple Leafs captain John Tavares called Muzzin “a warrior” and said “what he brings to our team is unmeasurable.”

“Very tough to see,” Tavares said. “Especially with how much you love that guy.”

Players from both teams gave stick taps as Muzzin was wheeled off. Muzzin is one of Toronto’s top shutdown defensemen, and he averaged 21:36 in 53 games this season. He played the first eight years of his NHL career with the Los Angeles Kings and was acquired by the Maple Leafs in a trade during the 2018-19 season.

With their win Tuesday, the Maple Leafs evened their best-of-five playoff series with the Blue Jackets at one game apiece. Game 4 is Thursday in Toronto.

Blue Jackets defenseman Zach Werenski began his postgame media availability by saying that he was thinking about Muzzin.

“No hockey game is as important as someone’s health,” Werenski said. “So we’re thinking of him right now.”

According to NHL protocol, any player who leaves the bubble must produce four consecutive negative COVID-19 tests over a four-day period before rejoining the team. The player is required to quarantine in his hotel room until the testing requirements have been fulfilled.

However, league sources told ESPN that a decision on a player such as Muzzin, who leaves to receive medical attention, will be discretionary. Should Muzzin be in a position to rejoin the team, league medical officials will weigh his degree of exposure while away and then determine quarantine and testing requirements for reentry into the bubble.