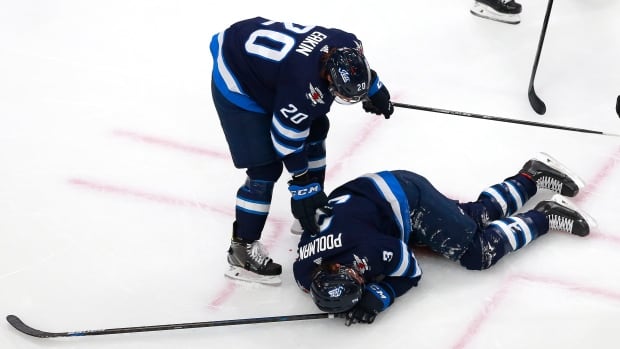 After four and half months of a pandemic-induced pause, the Winnipeg Jets were ready for the unusual spectacle of midsummer hockey.

Four days after the Stanley Cup playoffs started, the Jets are almost bloodied and bruised enough to be characters in the nordic slasher flick Midsommar, minus that scene at the end with the … well, we’re not going to get that graphic.

The Jets’ qualifying round best-of-five series against the Calgary Flames has been gory enough.

In Game One on Saturday, first-line centre Mark Scheifele, power-play sniper Patrik Laine and high-energy fourth-liner Mason Appleton were all injured seriously enough to miss the next two games of the series.

In Game Three on Tuesday, whirligig Winnipeg winger Mathieu Perreault also succumbed to injury, as he has so many times before during his time with the Jets.

Defenceman Tucker Poolman stopped a Mikael Backlund shot with his face, shedding enough blood on the ice to require a Rogers Centre clean-up crew to remove the snake-like trail he shed as he was helped back to the Winnipeg bench.

Poolman managed to hold on to all of his teeth as well as enough hemoglobin to return for the third period, with a cage covering his inflamed face.

Winnipeg, however, could not muster enough adrenaline to withstand a Calgary team that is quite literally smelling blood right now, after defeating the Jets 6-2 in a victory that places the Flames on the precipice of a qualifying-round victory.

“We have to win one game. There’s no magic to it,” Jets captain Blake Wheeler said following the literal and figurative bloodbath, which left the Jets down two games to one in the best-of-five series.

If the Jets don’t win Game Four on Thursday, they will be free to leave the Stanley Cup playoff bubble in Edmonton by the early hours of Friday morning.

In order to do that, Winnipeg will have to do a better job killing penalties.

On Tuesday, Calgary scored three goals on four power-play attempts as Winnipeg wound up chasing the Flames around their own zone instead of boxing them out.

“If you’re giving up three on the [penalty kill], you’re not winning those games,” Jets coach Paul Maurice said after the game.

“Still, five on five is right there,” Wheeler said, referring to even-strength competition between the two clubs. “We made a couple of mistakes that led to easy goals for them.”

There were a couple of bright spots for Winnipeg, in the form of a pair of pretty goals.

During the first period, defenceman Dmitry Kulikov sent the stretchiest of stretch passes — from behind his own goal all the way to the opposing blueline — to a streaking Nikolaj Ehlers, who rushed in on the wing and deposited the puck between Flames’ goalie Cam Talbot’s legs.

With the Jets on the power play during the second period, centre Andrew Copp did his best Kyle Connor imitation at the side of the net, shuffling the puck back and forth before raising it over Talbot.

Connor himself, however, has yet to score during this series. Wheeler also hasn’t scored.

And since Scheifele and Laine are hobbled, that means four out of the Jets’ top five offensive weapons have not inscribed their names on the pandemic-playoff scoresheet.

Only Ehlers, who was maligned prior to this series as the Disappearing Dane, has proven to be as dangerous as advertised.

Matthew Tkachuk was one of six Calgary skaters to tally in their 6-2 victory as they take a 2-1 series lead over Winnipeg. 1:11

Even worse, Jets goalie Connor Hellebuyck seems to be suffering once again from an ailment that afflicted him in the Western Conference Finals against the Vegas Golden Knights in 2018 — an inability to handle the puck behind his own net.

Early in the second period, Hellebuyck failed to pass off the puck to defenceman Neal Pionk, allowing Flames forward Andrew Mangiapane to feed Backlund in front of the net for an easy goal.

“I made a mistake and I paid for it,” Hellebuyck said after the game, denying he was plagued by a communication issue.

Maurice also dismissed the idea what happened with Vegas has not stayed in Vegas.

“He made the saves on their best chances,” said Maurice, insisting he only needs Hellebuyck to be a good goalie, not a puck mover. “I don’t need Connor Hellebuyck to drive our blueline.”

In 2018, the best Jets team in Winnipeg 2.0 history failed to unhorse the Golden Knights due to what seemed like an inability to make adjustments.

A much weaker Winnipeg squad has two days to figure out how to douse the much less formidable Flames and force a Game Five on Saturday.