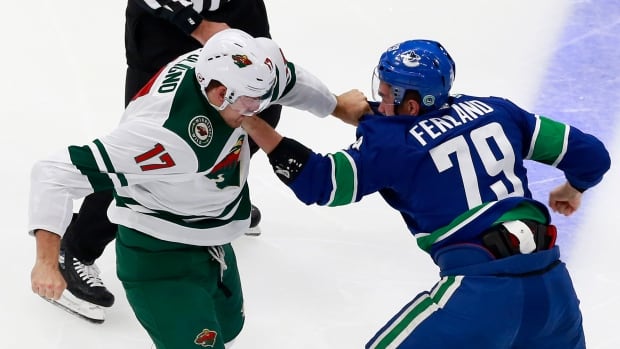 Vancouver Canucks forward Micheal Ferland will miss the remainder of his team’s qualifying series against the Minnesota Wild.

The Canucks announced on Wednesday that Ferland, who has left the Edmonton bubble to return home, is ‘unfit to play’ and will be re-evaluated at the end of the series.

Vancouver and Minnesota are set to play Game 3 of their best-of-five set on Thursday with the series tied 1-1. Game 4 is Friday and Game 5, if needed, goes Sunday.

Ferland had just 2:36 of ice time in Tuesday’s Game 2 victory before leaving.

<a href=”https://twitter.com/hashtag/Canucks?src=hash&amp;ref_src=twsrc%5Etfw”>#Canucks</a> confirm that Micheal Ferland is ‘unfit-to-play’ for the remainder of the play-in series vs Minnesota. He has returned home and will be re-evaluated following the series.

The 28-year-old from Swan River, Man., played just 14 games in 2019-20, producing one goal and five points, after getting derailed by a concussion in December.

The Canucks originally announced in February that he would miss the rest of the campaign due to concussion-like symptoms, however the temporary shutdown from the COVID-19 pandemic gave Ferland additional time to recover.

Ferland made a presence in Game 1 against Minnesota despite the extended time away from the rink.

He dropped the gloves with Wild forward Marcus Foligno less than two minutes after the opening faceoff.

Ferland also ended up being issued a $5,000 US fine, the maximum allowed, for spearing winger Ryan Hartman during the third period of Sunday’s series opener.

Wild forward Luke Kunin, who grabbed Ferland’s stick from the Minnesota bench before the spear, was fined $1,000 for unsportsmanlike conduct after delivering a whack to the leg of Ferland from the Wild’s bench in retaliation.

Ferland, who is in his sixth NHL season but first with the Canucks, has played 335 career games with Calgary, Carolina and Vancouver after breaking into the league with the Flames in 2014-15.