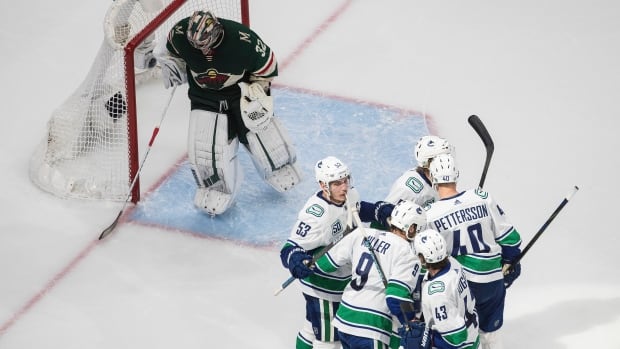 Jacob Markstrom got the shutout and Brock Boeser scored one for a fallen friend Thursday as the Vancouver Canucks pushed the Minnesota Wild to the brink of elimination in NHL qualifying play.

Markstrom stopped 27 shots and Boeser’s second period goal, his second of the series, held up as the winner in a 3-0 victory.

Boeser pointed to the sky after he scored to remember Ty Alyea. It was six years ago to the day that Boeser’s friends were in an SUV that lost control and rolled, killing Alyea. Boeser was in Slovakia at the 2014 Ivan Hlinka Memorial Cup at the time.

“It’s obviously a tough day for my friends and I,” said Boeser.

“It’s crazy how fast time flies, but to be able to get one for him is something special.”

WATCH | Quinn Hughes assists on every goal in Canucks’ win:

Rookie defenceman Quinn Hughes assisted on all of Vancouver’s goals, and the Canucks shut out the Minnesota Wild 3-0 to take a 2-1 lead in their best-of-five playoff qualification series. 1:03

The Canucks lead the best-of-five series two games to one and can punch their ticket to the round of 16 with a win Friday night.

Vancouver hasn’t been in the playoffs since 2015.

“We blocked a lot of shots today. The guys were sacrificing their bodies, blocking shots, and we did a great job cleaning out rebounds,” said Markstrom.

Antoine Roussel and Elias Pettersson also scored for the Canucks.

Vancouver Canucks head coach Travis Green speaks to the media after his team took a 2-1 series lead over the Minnesota Wild. 8:30

Boeser broke the ice to score at 13:49 of the second frame, backhanding a rebound off a Pettersson slapshot past Minnesota goalie Alex Stalock.

Two minutes into the third frame, Vancouver capitalized on a mistake to take a 2-0 lead.

Wild defenceman Brad Hunt bobbled the puck at the Canuck blue line, allowing Roussel to race past him, grab the puck on a breakaway and shovel it on the backhand past Stalock.

Petterson scored his first post-season goal late in the third, one-timing a pass from Quinn Hughes on a two-on-one power-play rush.

Penalties continue to pile up

Each team took 11 penalties: hooking, slashing, roughing, tripping, and boarding alongside some highlight moments of thuggery.

In the first period, Roussel was penalized after he ran over Stalock behind Minnesota’s net.

Midway through the second, Vancouver’s J.T. Miller went after Minnesota’s Ryan Hartman after Hartman laid a dangerous hit on Pettersson, hitting him head first into the boards while Pettersson was bent over.

In the third, frustrated Wild forward Kevin Fiala elbowed Backstrom after the whistle, leading to Vancouver’s Brandon Sutter racing in to level him in the corner.

“It’s tough. You’re trying to get flow in the game, and it just seemed like when you did get something going it was a power play or a penalty kill,” said Foligno.

“We’re such a good five on five team and when we can roll five lines we’re really good. We definitely just have to calm it down a little bit with the penalties.”

Stalock made 26 saves going the distance for his third complete game of the series.

The Canucks were successful despite injuries taking a bite out of their lineup.

Forward Tyler Toffoli didn’t dress for a second consecutive game, dealing with an with an undefined foot injury. Forward Micheal Ferland has been sent home for the series, deemed unfit to play. Ferland has had concussion problems this year and played very little in Game 2.

The Wild wore their green uniforms as they were the “home” team.

The Wild missed the playoffs last year preceded by first-round exits in each of the preceding three seasons.

Minnesota was 35-27-7 in the regular season, good for 21st overall and the 10th seed in the Western Conference.