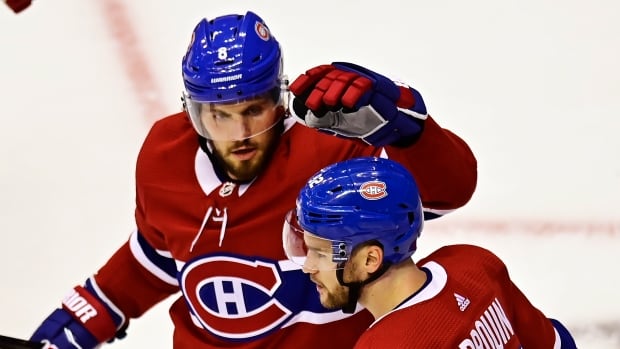 Ben Chiarot says when his confidence goes up, the game slows down.

It must be moving at a snail’s pace right now for the Montreal Canadiens defenceman.

Chiarot played an instrumental role in Montreal’s come-from-behind 4-3 win over Pittsburgh on Wednesday that gave the surprising Canadiens a 2-1 lead in their best-of-five preliminary-round series with the Penguins. He paired with captain Shea Weber to help contain a potent Pittsburgh offence that includes Sidney Crosby, Evgeni Malkin and Jake Guentzel.

Defensively, Chiarot was plus-4 in 23 minutes of ice time and blocked a shot from Malkin late in the game with the Canadiens hanging on to a one-goal lead. He also showed some offensive flair, registering the primary assists on Jonathan Drouin’s second-period goal that cut Pittsburgh’s lead to 3-2, and later Jeff Petry’s winner.

Chiarot has spoken before of his rising confidence since signing a three-year deal with the Habs this past off-season (with an average annual value of $3.5 million US) following five seasons in Winnipeg.

In a media availability Thursday, he talked about how the pace of hockey changes for him when he is on his game.

“I think any player will tell you, when they have confidence it’s a completely different game for them,” Chiarot said. “The game slows down, everything seems easier, you’re making plays and you’re not too worried about making a mistake.

“When the game feels faster or you don’t feel at your best, that’s when things get kind of hard for you. Everything just kind of slows down when you’re feeling good and you’re feeling confident.”

Chiarot said one of the Canadiens’ strength comes from defending as a five-man unit, something that Malkin can attest to.

“They play unbelievable in the [defensive] zone,” Malkin said of the Canadiens on a Thursday videoconference. “All five guys, they try blocking shots, they play so tight, and we respect that.”

Game 4 of the series goes Friday.

Oilers defenceman Oscar Klefbom says his team will need to stay out of the penalty box in Game 4 of their preliminary-round series against Chicago.

The Oilers gave its opponent six power-play chances in Chicago’s 4-3 win on Wednesday. While Chicago converted just one of those chances, the penalties forced some of the Oilers’ most dangerous players to the bench. Connor McDavid didn’t spend any time on the penalty kill, and Leon Draisaitl was on the ice for just 1:38 when the Oilers were short-handed.

Edmonton now finds itself down 2-1 in the series and facing elimination.

“I’m not going to sit here and criticize all the calls, but we’ve just got to be smart,” said Klefbom, who did not pick up a penalty in the game. “Playoffs are a lot about special teams overall, and last night was no exception. It’s a lot of minutes in the penalty box, and obviously it can hurt you.”

Mike Hoffman is a big reason why the Florida Panthers are hanging on at the NHL’s Toronto hub.

Hoffman had a power-play goal and an assist in Florida’s 3-2 win over the New York Islanders on Wednesday afternoon that allowed the Panthers to stave off elimination in the playoff qualification series.

Hoffman now has four points in three games in Toronto, with three of those points coming on the power-play.

“Hoff is a unique player,” Panthers coach Joel Quenneville said Thursday. “He’s got lots of ability, he’s got some tremendous assets. Might shoot as good as anybody in the league.”

Game 4 of the series, with the Islanders leading 2-1, goes Friday.

Coyotes takes it 1 period at a time

The Arizona Coyotes moved to the cusp of advancing out of the preliminary round with a 4-1 win over Nashville on Wednesday in Edmonton.

“I don’t want players to feel uncomfortable, but I want them to understand the fact that you can’t look past anything,” Tocchet said Thursday. “You can’t look past your first shift, your second shift. You can’t look at the end result. You have to look at what’s in front of you, and that’s your shift-to-shift, period-to-period.”

Tocchet would know a thing or two about closeout games. He is a veteran of 145 NHL playoff contests during his playing career and is a three-time Stanley Cup champion: as a player in 1992 and as an assistant coach in 2016 and 2017, all with the Penguins.

Montreal coach Claude Julien admits it’s hard to get to get some shut-eye after a tough battle on the ice.

“Do I have trouble sleeping after a game? Absolutely,” Julien said Thursday. “Just because you’re wound up. You know, win or lose, it doesn’t matter. You’re thinking, you’re like players. You got excited about the game and you’re emotionally attached to it.”

One thing Julian tries not to do, however, is dwell on a game after it’s finished, regardless of the result.

“The minute the game’s over, turn the page, move on and start thinking about the next one,” he said.