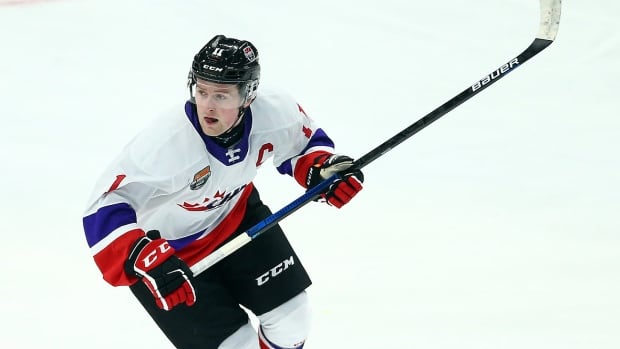 “The No. 1 overall selection,” Daly began before flipping it over to reveal the league’s logo, “belongs to a team yet to be determined.”

And with that, the second phase of the unique process in a season like no other was triggered, signalling that the first eight franchises eliminated from the NHL’s 24-team restart would earn the right to pick prized winger Alexis Lafreniere.

The placeholder spot that won the lottery back on June 26, designated as Team E, had a 2.5 per cent chance of winning the draw, making the biggest jump in NHL history for the top selection, going from No. 12 all the way up to No. 1.

NHL Deputy Commissioner Bill Daly announced that the first overall selection in the 2020 NHL Draft will belong to a team that has yet to be eliminated from the qualifying round of the Stanley Cup playoffs. 1:12

The No. 1 overall pick will be awarded when the 2020 NHL Draft Lottery resumes Monday at 6 p.m. ET.

The league said Thursday that Phase 2 of the lottery will take place at NHL Network studios in Secaucus, N.J.

The Los Angeles Kings own the second selection in the draft, tentatively scheduled for Oct. 9 and 10, while the Ottawa Senators will choose third and fifth. The No. 3 pick originally belonged to the San Jose Sharks, but was acquired as part of the Erik Karlsson trade back in 2018.

The Detroit Red Wings, who had the best singular odds winning the initial phase of the lottery on June 26, own the fourth selection, while the Anaheim Ducks, New Jersey Devils and Buffalo Sabres round out the top-8.

After the draw for the No. 1 pick, selections nine through 15 will be determined by the regular-season points percentage of the other seven losers in the qualifying round at the time the league’s suspended play March 12 because of COVID-19.

The second through eighth selections were determined in the first phase of the lottery on June 26. The remaining 16 selections for the first round of the draft will be determined by the results of the 2020 Stanley Cup Playoffs.

The league was originally scheduled to hold the 2020 draft at the Bell Centre in Montreal, not far from Lafreniere’s hometown of St-Eustache, Que.

A winger from the Rimouski Oceanic and NHL Central Scouting’s top-ranked North American skater, the 18-year-old is the two-time Canadian Hockey League player of the year. Lafreniere had 35 goals and 112 points in 52 games before the Quebec Major Junior Hockey League season was cancelled because of the novel coronavirus outbreak.

Lafreniere was also named MVP of the 2020 world junior hockey championship after helping lead Canada to gold in the Czech Republic.

Prior to the 2020 draft lottery, no team had ever jumped up more than four spots to pick first, but plenty of teams have beat the odds to get into the top-3. The Philadelphia Flyers went from No. 13 to No. 2 in 2017, the Carolina Hurricanes skipped the line to go from No. 11 to No. 2 in 2018, and the Chicago Blackhawks jumped from No. 12 to No. 3 last year.