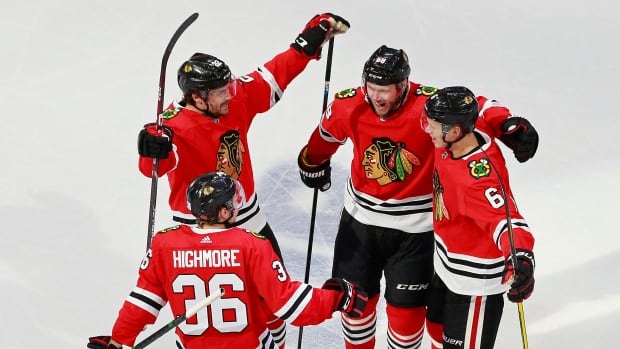 Chicago scored twice late in the third period to defeat the Oilers 4-3 on Wednesday, pushing Edmonton to the brink of elimination in NHL qualifying round action.

Oilers defenceman Ethan Bear ended up errantly tipping in a Chicago point shot with just over a minute left in the game. Connor Murphy got credit for the goal.

The Oilers had to play without Adam Larsson, their first-pairing shutdown defenceman. Larsson was declared unfit to play prior to puck drop.

The NHL is not divulging details on injuries or whether individual players have tested positive for COVID-19.

Jonathan Toews got credit for this goal with 1:27 remaining in the third period as the Chicago Blackhawks edged the Edmonton Oilers 4-3. 1:01

It was a close-checking game compared with the free-wheeling first two contests of the series, which saw the teams combine for 19 goals.

Maatta opened the scoring at 9:23 with a slapshot from the blue line through traffic past a screened Edmonton goalie Mikko Koskinen.

Draisaitl responded 28 seconds later. Winger Kailer Yamamoto won a fight for the puck behind the net, dished it out front to Tyler Ennis, who in turn delivered a no-look pass through the crease for a one-timer by Draisaitl past Chicago goalie Corey Crawford.

Edmonton got into penalty trouble late in the first period and Chicago made the Oilers pay. On a 5-on-3 advantage, Kirby Dach centred the puck into a scrum of bodies in the crease. The puck bounced off Toews’ skate and in with five seconds left in the period.

The Oilers tied the game four minutes into the second period. Catching Chicago running around in its own end, Oilers defenceman Matt Benning stepped into a blue-line slapshot that bounced off Crawford’s pad to Draisaitl, who pounced on the rebound to make it 2-2.

McDavid gave Edmonton a 3-2 lead on the power play with eight seconds left in the middle frame. Draisaitl shot the puck from the right half boards. Crawford stopped it with his pad, but McDavid scooped up the rebound for his series-leading fifth goal.

Chicago tied the game at three with less than six minutes to go in the third period when Highmore tipped a Slater Koekkoek slaphsot over Koskinen’s shoulder.

The Oilers went down another player late in the second period when Tyler Ennis got checked into the boards by Dach behind the Oilers net, involving knee-on-knee contact that left Ennis writhing on the ice. He had to be helped off, not putting any weight on his right leg.

Andreas Athanasiou joined the Draisaitl line in his place.

Chicago wore its red jerseys as the “home team” and, in another weird twist in the Year of COVID, dressed under the big orange Oilers logo set into the ceiling in their dressing room.

But there is no advantage in these hub-bubbled playoffs to being “home” beyond having the last shift change. The seats are empty, covered over in blue tarps, and the pump-up arena music is played for both teams when they go on the power play.

Game 4 goes Friday. The Oilers have not seen the post-season since losing in the second round in 2017.