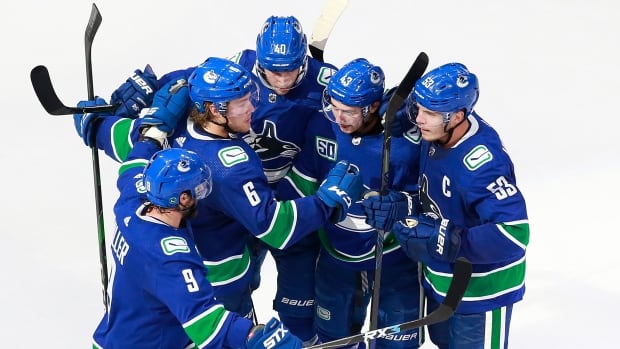 The future of the Vancouver Canucks belongs to a core of talented young players led by Elias Pettersson, Quinn Hughes and Brock Boeser, who are all experiencing their first NHL post-season action.

But if the current edition of the Canucks hopes to advance to the next round of this year’s Stanley Cup tournament, it needs veterans to step forward while the young players undergo on-the-job playoff training.

Those veterans were mostly quiet in a 3-0 loss Sunday, but made plenty of noise in leading Vancouver to a 4-3 win over the Minnesota Wild Wednesday. The best-of-five qualifying series could be decided in back-to-back games Thursday and Friday.

“Getting shut out in Game 1, we felt like crap,” said J.T, Miller, who had two shots on net and was minus-1 in the opening loss. “We felt like we didn’t play a bad game, but we had more to give.

“We talked about 15 or 20 more per cent. I think up and down the lineup everybody contributed.”

Bo Horvat’s tip on a Quinn Hughes slapshot ended up being the decider after a late surge from Minnesota in Vancouver’s 4-3 win. 0:49

Tanner Pearson, who won a Stanley Cup with the L.A. Kings in 2014, scored just 24 seconds into Tuesday’s game. Miller, who has 61 games playoff games with the New York Rangers and Tampa Bay Lightning, had a goal and an assist.

Captain Bo Horvat, who was a rookie when the Canucks last appeared in the playoffs in 2015, had a goal and an assist. Defenceman Alex Edler, who played for the Canucks when they lost in Game 7 of the 2011 Stanley Cup final, led Vancouver with just over 24 minutes of ice time and four hits.

Pearson said the veterans needed to show some calm and guidance. Going down 2-0 would have dug the Canucks into a very deep hole.

“You can’t wait a few games to get it going,” he said. “With us contributing and trying to do our part, it helps — and we got the ball rolling.”

Tyler Toffoli, another member of the Kings’ 2014 Cup team, missed the game due to injury. Loui Eriksson, a first-game scratch, was inserted into the lineup and played on Horvat’s line with Pearson.

Green praised the strong defensive play of Eriksson, who logged just over 20 minutes, and the 15 faceoffs won by Horvat, many late in the game when Vancouver was protecting the lead.

The absence of Toffoli meant Boeser, a 2018 Calder Trophy candidate was reunited on a line with Pettersson and Miller. Boeser, who fractured a rib Feb. 10, scored in the second period — his first goal since Jan. 11.

The Canuck bench was shortened when forward Micheal Ferland didn’t return for the second period and winger Antoine Roussel left in the third after taking a puck to the face. Vancouver said Wednesday night that Ferland, who has a history of concussion problems, is unfit to play for the rest of the series.

After having just one power-play chance in the opening game, the Canucks had seven man-advantages and scored a goal in Game 2. Vancouver generated the second-most power-play opportunities in the league during the regular season.

“In playoffs, a lot of the penalties usually come when there is heavy pressure in the offensive zone and the defences are tired,” he said. “That’s where you start to see a lot of hooks, slashes and trips.

“For us to draw more penalties it’s going to the hard areas, playing down low.”

Each game has seen the intensity level increase, with some big hits delivered and players exchanging words after the whistle.

“It just shows both teams aren’t taking any crap from each other,” Pearson said. “There is a lot of push back, a lot of stuff between whistles.