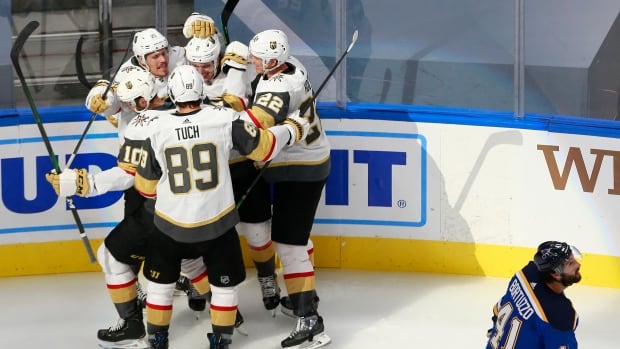 Mark Stone scored the go-ahead goal on a deflection with under 7 minutes left, and the Vegas Golden Knights took a big step toward clinching the top seed in the Western Conference by beating the St. Louis Blues 6-4 in round-robin play Thursday night.

Vegas would be the West’s No. 1 seed with a win against Colorado on Saturday. The team that went to the 2018 Stanley Cup Final and was eliminated after a questionable call in Game 7 against San Jose looks capable of winning it all.

“We came into Edmonton wanting to play our best hockey, whether that got us three wins or no wins,” Stone said. “So long as we’re playing well, we feel confident against anyone.”

Despite leading the conference when the NHL season was shut down in March, defending champion St. Louis can finish no higher than third and needs to beat Dallas on Sunday to avoid the No. 4 seed.

The Vegas Golden Knights scored three unanswered third period goals as they came from behind to beat the St. Louis Blues 6-4 and improve to 2-0 in the Western Conference round-robin competition. 1:01

“I don’t know if we thought it was going to be easy coming in here for these round-robin games,” Blues coach Craig Berube said. “Our compete level has to come way up. … We have to get to another level Sunday.”

The Golden Knights dominated the Blues in each team’s second game, outshooting them 38-17. St. Louis goalie Jordan Binnington was sharp early and made 32 saves but wound up getting shelled.

Alex Tuch and Shea Theodore each scored twice for Vegas, while defenceman Zach Whitecloud and Stone added a goal each. Tuch also had an assist on Whitecloud’s goal.

“Tonight never really felt in doubt,” Stone said. “I thought we played as good a 60 minutes as we could.”

Like the East’s top-seeded Boston Bruins, who they beat in the 2019 Cup Final, the Blues have some work to do before moving into an elimination series. They got two goals from defenceman Colton Parayko, David Perron’s second in two games and one from Troy Brouwer, who was inserted into the lineup amid several injuries.

Vegas’ victory sets the table for a winner-take-all game against the Colorado Avalanche on Saturday for top in the Western conference round robin as both teams enter undefeated in the competition.

In part 2 of 10, Rob Pizzo examines whether the defending champion Blues will come out of the round-robin with the #1 seed.  1:16