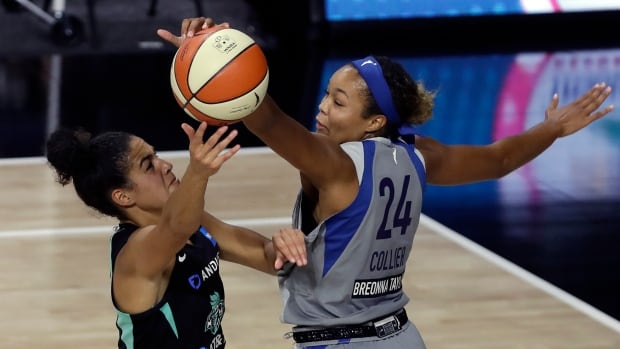 The Liberty (1-5) shot their way out of the winless column with 12 3-pointers as Zahui B. went 4 of 9 from beyond the arc and Layshia Clarendon 4 of 5 from distance. Clarendon also finished with 14 points.

Canadian Kia Nurse had a team-high 17 points to lead the New York Liberty to a 74-66 victory over the Washington Mystics. 1:06

Lexie Brown scored a career-high 26 points with nine assists and four steals and the Lynx used a second quarter surge to beat the Fever.

Down 23-18 after period one, the Lynx (5-1) — winners of four straight — went on a 17-3 run to start the second and never trailed again. Sylvia Fowles started the Lynx on their way after converting a three-point play and a layup. Minnesota held Indiana (2-4) to 11 points in the second.

Canada’s Bridget Carleton added seven points and four rebounds on perfect 3-for-3 shooting for the Lynx.

Kennedy Burke’s 3-pointer with 5:57 reduced Indiana’s deficit to 76-73 with 5:57 left to play. Candice Dupree then made 1 of 2 foul shots to make it a two-point game, but Fowles responded with a pair of foul shots and a basket to blunt the Fever comeback. Fowles scored 21 points.

Kelsey Mitchell and Tiffany Mitchell each scored 15 points for the Fever and Teaira McCowan scored 11 points with 12 rebounds.

Canadian Bridget Carleton had 7 points off the bench as the Minnesota Lynx beat the Indiana Fever 87-80. 1:00