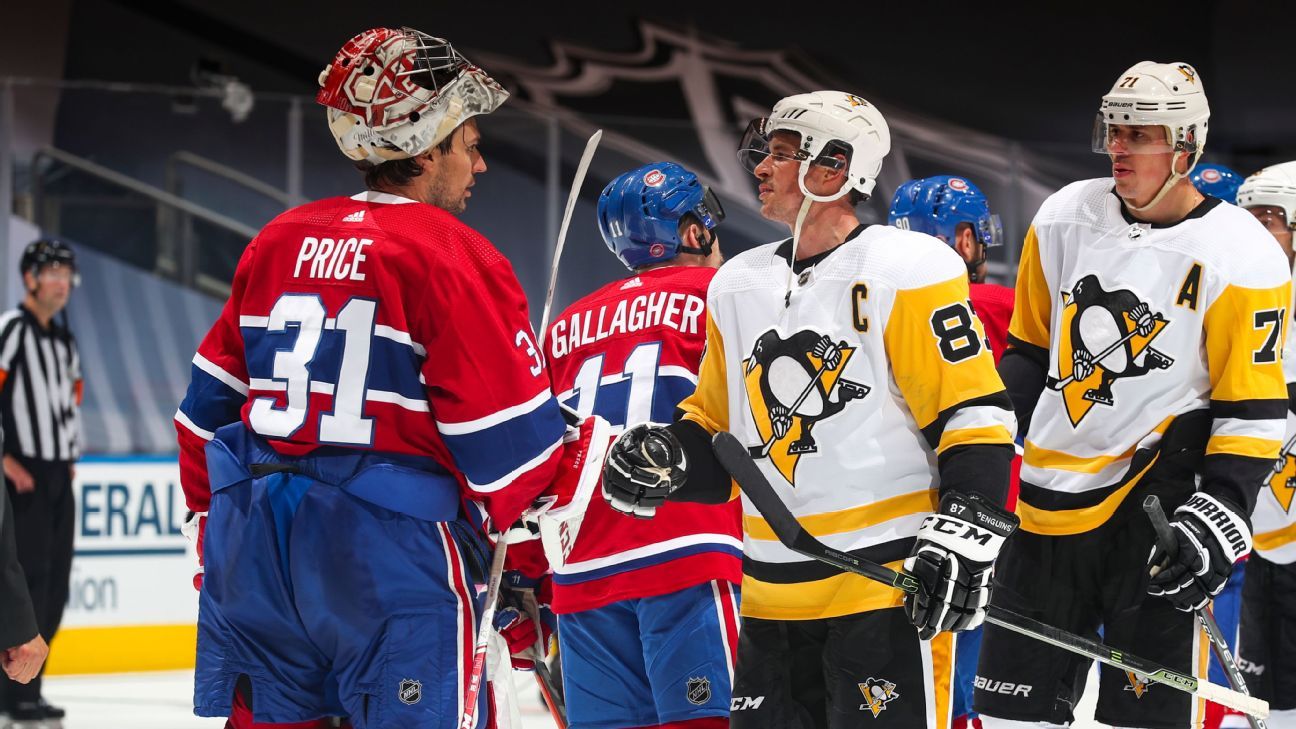 TORONTO — The Pittsburgh Penguins entered their qualifying round matchup against Montreal healthy but wary. Optimistic but guarded. While they’d shown plenty of grit during a regular season that featured extended absences by high-profile names on their star-laden roster, in a short series facing a goaltender like Carey Price, they took nothing for granted.

In the end, they ended up taking nothing at all.

Artturi Lehkonen flipped a shot past Tristan Jarry with 4 minutes, 11 seconds left to lift Canadiens to a stunning 2-0 victory on Friday and clinch Montreal’s first playoff berth in three years.

Paul Byron took advantage of a Pittsburgh turnover, darted behind the Penguins’ net and then slipped a pass to Lehkonen in front. The 25-year-old Lehkonen found enough space between four Pittsburgh players — all of whom had their eyes on Byron — to slip the puck into the open net.

The Penguins mustered little down the stretch and Shea Weber added an empty-net goal in the final seconds as the 12th-seeded Canadiens won the best-of-five qualifying round over fifth-seeded Pittsburgh in four games.

“Everybody was kind of counting us off, so of course it feels good to get to win this series,” Lehkonen said. “But it was one series and now we’ve got to enjoy this for a moment and then move on.”

Price stopped 22 shots to collect his sixth career playoff shutout. Montreal will advance to the first round of the playoffs against either Tampa Bay or Philadelphia.

Three years removed from becoming the first team in a generation to win consecutive Stanley Cups, the Penguins are now just 1-9 in their past 10 playoff games dating to the second round of the 2018 postseason.

“Listen, it’s a three out of five,” said Pittsburgh captain Sidney Crosby, held scoreless on his 33rd birthday. “Anything can happen. We did some good things. We didn’t do enough. Give them credit. They played really well. Got some big plays throughout the four games.”

Jarry made 20 saves in his first career playoff start, including a stellar glove save to thwart a breakaway by Montreal’s Brendan Gallagher early in the third period. Pittsburgh’s high-powered lineup, however, did little to provide Jarry with any support.

After taking a 3-1 lead in the middle of Game 3, the Penguins didn’t put another puck past Price over the final 94:26 of the series.

“We know he’s a great goalie,” Crosby said of Price. “I don’t think it was a matter of trying to play around him. He did what we expected him to do. He gave his team a chance to win and unfortunately we didn’t do a good job of putting pucks in the net or when we got a lead like last game, building on it.”

His team badly outplayed in the final minutes of a 4-3 loss in Game 3, Pittsburgh coach Mike Sullivan turned to Jarry in search of a spark.

The 25-year-old was an unlikely All-Star in February thanks to a stellar first half that helped Pittsburgh stay afloat despite a series of injuries, Crosby chief among them.

Yet, Jarry had struggled before the shutdown created by the coronavirus pandemic, losing each of his past four starts. He tried to keep sharp while back home in western Canada, using his two English mastiffs as training partners during the extended layoff.

While Jarry was sharp in his first start in five months, for long stretches there was little jump from the Penguins against the last team to enter the expanded 24-team tournament.

The Canadiens, who were in the process of playing out the string before the “pause” and the ensuing fallout put them in postseason position, were only too happy to slow the game down. Still, they generated most of the quality scoring chances and Lehkonen’s winner came at the end of another sloppy sequence by the Penguins.

Now Pittsburgh heads into another extended offseason. Last summer they jettisoned veteran forward Phil Kessel and preached the need for more defensive responsibility by their talented forwards. They got it during the regular season. Not so much in the playoffs against a team they were expected to breeze past. Crosby, Evgeni Malkin and defenseman Kris Letang are all well into their 30s. Still, they are confident the window on them being Cup contenders has not closed.

“I think these guys are still elite players,” Sullivan said. “I believe in this core. I just think they’re such character guys. They’re elite hockey players and I still think there’s elite play left in them.”