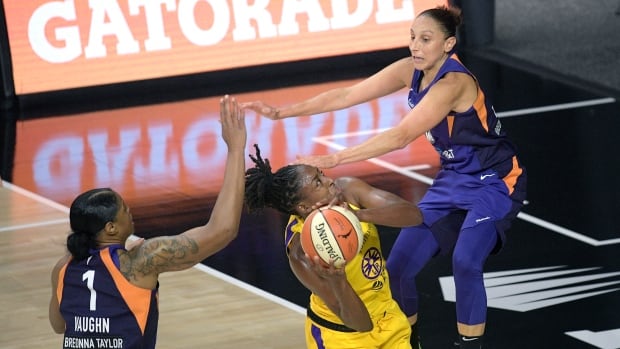 Diana Taurasi, who scored 14 points, made three of Phoenix’s four successful 3-pointers. Taurasi departed the contest midway through the fourth quarter with a hip injury, according to Mercury coach Sandy Brondello.

Mercury guard Diana Taurasi, who missed most of last season with back and hamstring issues, was injured during Phoenix’s 74-68 loss to the Seattle Storm. 1:47

The Storm also forced the Mercury into 18 turnovers, including a combined 11 from Diggins-Smith and Taurasi.

Sami Whitcomb contributed to the bevy of turnovers forced with three steals for the Storm, while Jordin Canada, Natasha Howard and Loyd each made two takeaways.

Canada — starting in place of Sue Bird, who sustained a bruise on her left-knee bone last week — chipped in offensively with 10 assists. This marks the third time in her three-year career Canada tallied double-digit assists.

After trailing by double digits for much of the second half, Phoenix went on a tear in the final 52 seconds to climb within four points. Sophie Cunningham sparked the outburst with four of her nine points and an assist over that stretch.

The Mercury trailed by 20 points heading into the final period and chipped away at the deficit before the final 12-5 run in the last 1:59. Phoenix outscored Seattle in the fourth quarter, 26-12.

The loss snapped a four-game winning streak for the Mercury, while the Storm extended their own streak to four/