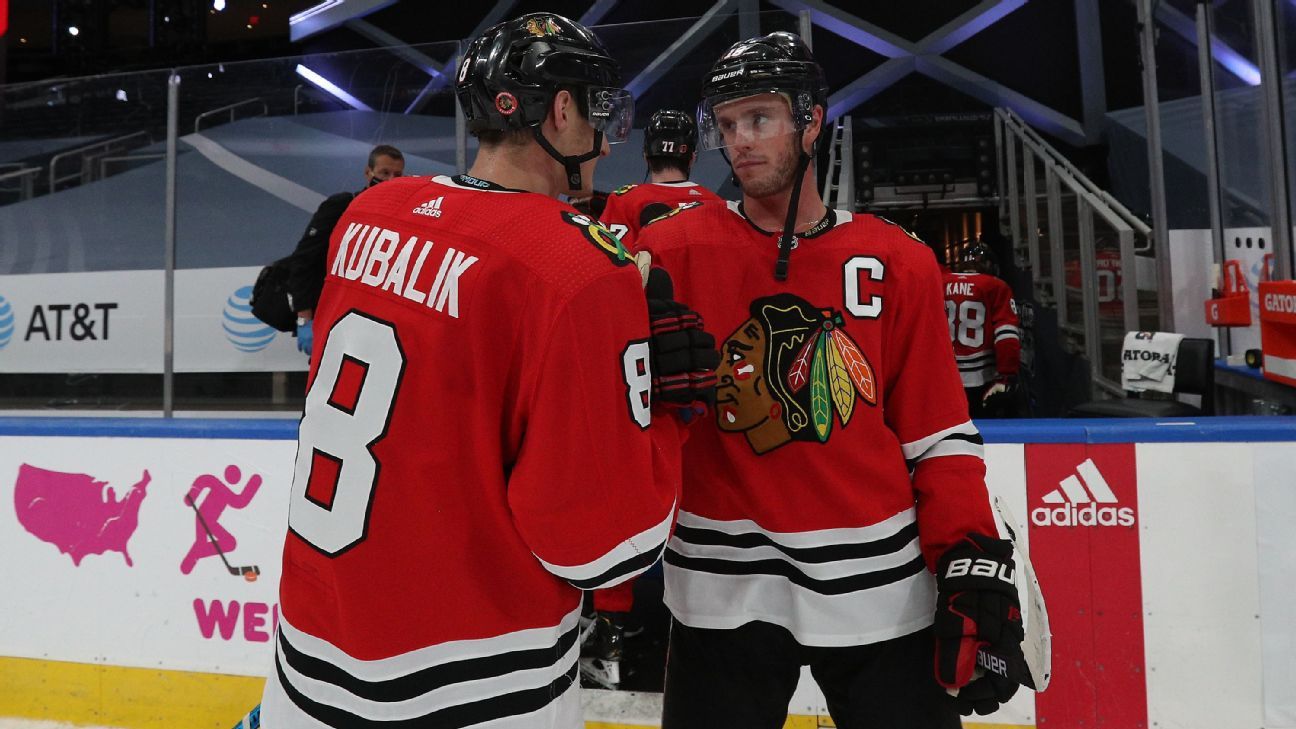 The third time Jonathan Toews lifted the Stanley Cup for the Chicago Blackhawks was in 2015, which also marked the last time they advanced in the NHL postseason. That was until Friday night, when they shocked the Edmonton Oilers and won their qualifying-round series in four games.

No. 12-seeded Chicago eliminated the No. 5-seeded Oilers with a 3-2 victory in Game 4 of their five-game series, played in an empty arena in the NHL’s Edmonton “hub.”

The Blackhawks would not have been in the postseason were it not for the NHL’s decision to expand the postseason field to 24 teams, after pausing its regular season due to the COVID-19 pandemic. They were considerable underdogs in the series, partially because of the perception that the championship contention window had closed for Chicago’s veteran core of players.

“There’s always going to be unwarranted praise and criticism,” said Toews, who finished the series with seven points in four games, including four goals. “I think our group has always done a good job in not listening to either. We missed the playoffs for a couple of years. You’re bound to have people come down on you a little bit.

“I don’t think any of that fazed us. We were eager to get this chance, to show what we can do. Technically, we just made the playoffs. So the real fun begins.”

The Blackhawks will face the winner of the Vegas Golden Knights vs. Colorado Avalanche round-robin game scheduled for Saturday.

Edmonton was seeking to return to the round of 16 for just the second time since 2006.

“At the end of the day, you play this game to win a Stanley Cup,” Oilers defenseman Darnell Nurse said. “And we’re sitting here after a qualifier not even in the playoffs, not even in the top 16. So you can talk about strides all you want. I don’t think anyone’s happy.”

Edmonton opened the scoring just 45 seconds into Game 4 on a Josh Archibald goal. Connor McDavid had the assist, and ended the series with a series-high nine points in four games. Chicago responded with goals from Brandon Saad and Matthew Highmore to end the first period with a lead, and then Edmonton tied the game at 2:02 of the second period on a Ryan Nugent-Hopkins goal.

With the scored tied 2-2 in the third period, Toews won a puck battle with Edmonton defenseman Ethan Bear and sent a pass to Dominik Kubalik, whose one-timer beat Oilers goalie Mikko Koskinen for the lead. For Kubalik, a finalist for NHL rookie of the year after a 30-goal season, it was his first point since a record-setting five-point performance in Chicago’s Game 1 win.

For Toews, it was another key moment in an outstanding series for the Blackhawks center.

The Oilers’ rally after the goal was subverted by a costly penalty for too many men on the ice with 2:01 left in regulation. Special teams became the story of Game 4: Edmonton’s power play fizzled at the wrong time.

In the regular season, the Oilers converted 29.5% of their power-play chances, the best mark since the 1978-79 New York Islanders. But in Game 4, they went 0-for-5 on the power play, including a five-minute major penalty assessed to Chicago for an Alex DeBrincat boarding penalty in the second period. After going 3-for-4 on the power play in Game 1, the Oilers were 2-for-13 the rest of the series.

“We knew what we wanted to do coming into this series,” Toews said. “Tonight was the first time when we had an actual answer to their power play. And great goaltending, obviously.”

Blackhawks goalie Corey Crawford made 43 saves in the Game 4 win. His status for the series was in question last month, when Crawford said he tested positive for COVID-19. A weeks-long quarantine interrupted his training.

“It wasn’t the best scenario. I would have liked a few more weeks of practice. It is what it is. I’m just trying to work hard to be ready. I felt way better each game,” he said.

As did the Blackhawks, who closed out the series with two strong efforts in which they controlled the pace against the high-octane Oilers — and in the process joined Montreal as No. 12 seeds that stunned their qualification-round opponents, as the Canadiens eliminated the Pittsburgh Penguins earlier on Friday.

“You gotta sneak in there. In the first round, anything can happen,” Toews said.