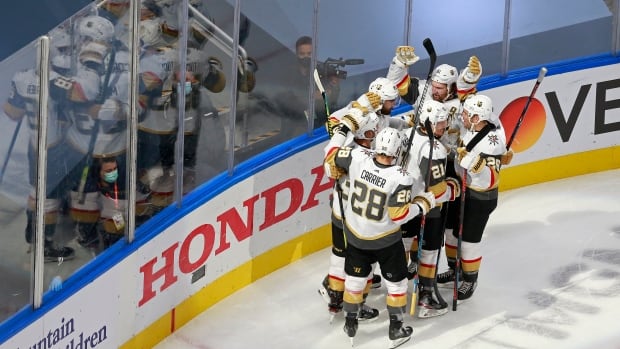 Alex Tuch scored 4:44 into overtime, Jonathan Marchessault had two goals and the Vegas Golden Knights beat the Colorado Avalanche 4-3 on Saturday to earn the No. 1 seed in the Western Conference.

The Golden Knights will face Chicago in the first round of the playoffs. The second-seeded Avs take on Arizona.

Tuch scored the winner on a shot over the shoulder of Avalanche goaltender Philipp Grubauer. The Avalanche tied the game with 1:02 left in regulation when J.T. Compher poked in the puck.

Marchessault scored in the second period and again early in the third when he was pulled down by Avalanche defenseman Ryan Graves on a breakaway. Awarded a penalty shot, Marchessault beat Grubauer to the glove side.

The Vegas Golden Knights needed overtime to take down Colorado by a 4-3 final in their final round robin game before the playoffs. 1:17

Nicolas Roy also scored for the Golden Knights, who finished 3-0 in the playoff seeding round between the top four teams. Colorado wound up 2-0-1.

It was Tuch’s third goal in round-robin play.

Robin Lehner finished with 32 saves in starting over Marc-Andre Fleury. Lehner was acquired in a trade with the Blackhawks in February.

Joonas Donskoi and Nathan MacKinnon scored for the Avalanche. Grubauer was in net over Pavel Francouz, who stopped 27 shots in a shutout win over Dallas on Wednesday. The veteran Grubauer was solid in saving 22 shots.

Colorado’s Pierre-Edouard Bellemare had a breakaway chance late in the third against his former team, only to send the shot high.

The intensity was raised to another level in a second period that featured four goals. The scoring spree got started when Marchessault tipped a power-play shot past Grubauer. MacKinnon was in the penalty box for an unsportsmanlike call after voicing his displeasure over an icing call.

MacKinnon, a candidate for the league’s MVP honors along with the Lady Byng Trophy, atoned for losing his cool by tying the game with a spinning, backhanded shot on the power play.

Vegas jumped in front again when Roy pounded in a shot with heavy traffic in front of the net. It would last less than two minutes as Donskoi tied it up.

Colorado had a golden opportunity in the first period during an extended 5-on-3 power play. The best scoring chance was by Mikko Rantanen, but his shot down low was plucked out of the air by the glove of Lehner.

The Twitter accounts for both sides were certainly entertaining leading into the game. The Vegas crew sent: “Rock Paper Scissors for the No. 1 seed???”

The Avalanche side responded: “You guys just love to gamble don’t ya?”