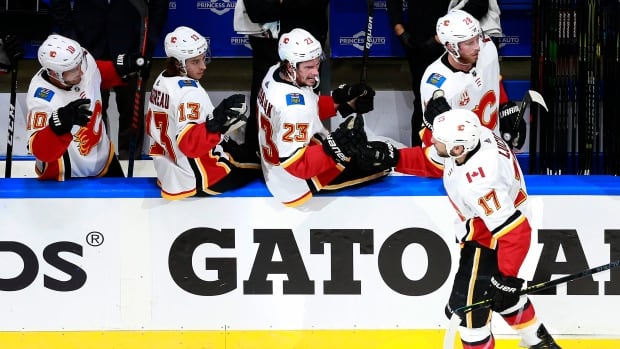 Bruising Milan Lucic is the poster child for the collective mood and mindset of the Calgary Flames as they prepare to clash with the Dallas Stars in the first round of the Stanley Cup playoffs.

Back in October, the Edmonton Oilers castoff considered retiring in spite of his hefty paycheques. Snakebitten on the scoreboard, and sluggish in his skating, the Vancouver native looked nothing like the power forward who won a championship in 2011 with the Boston Bruins.

But life has shifted for Lucic in the last nine months. And in the Stanley Cup qualifying round last week against Winnipeg, he collected one goal and four points in four games.

He also set the tone for the deciding Game 4 by fighting, and handily beating, Winnipeg defenceman Nathan Beaulieu off the opening faceoff.

“I don’t think people thought that he would score this much. But with as many of the things he does for us at this time of year and the positions he puts himself in, I don’t think it’s a surprise to us on this team that he’s been on the point-a-game pace.”

Truthfully, it’s a surprise for many to see the Flames in the playoffs given the saga that was their 2019/20 regular season.

First came the terrifying collapse of soft-spoken defenceman T.J. Brodie during practice back in November. (He thankfully returned to the lineup two weeks later after a brief stint in hospital.)

Then came the dismissal of former head coach Bill Peters over allegations of racist comments made towards minor leaguer Akim Aliu back in 2009-10 with the American Hockey League’s Rockford IceHogs.

As the season progressed, the Flames endured constant rumours about star forward Johnny Gaudreau wanting to leave Calgary to play closer to his family in New Jersey. And then came the league-wide pause due to the COVID-19 pandemic.

“The readiness level of our team to get into Game 1 is there right now.” <br><br>Geoff Ward shares his thoughts on the upcoming first round matchup against the Stars. <a href=”https://t.co/cCwA4vHtTF”>pic.twitter.com/cCwA4vHtTF</a>

In 2018-19, the Flames finished first in the Western Conference. They lost in the opening round to Colorado — a defeat that saw some fans call for management to break up the core and start over.

Now the Flames have dispatched Winnipeg and they’re on to the best-of-seven opening round series against the Stars.

“For a lot of us on the team, the younger guys, that was our first taste at what winning a round is like, so that was pretty cool,” agitating forward Matthew Tkachuk said of beating the Jets. “We definitely enjoyed it and are happy with it, but it means nothing right now.

“I think we should be confident going into this next round. But this is a different beast, this team. This is a very, very highly skilled, big team. They can fly, and they’re physical.”

The Flames are also physical, led by the line of Lucic, Sam Bennett and undersized Dillon Dube. Granted, the Jets were without two of their best forwards in the injured Mark Scheifele and Patrik Laine. But Calgary absolutely punished the Jets on the forecheck.

“We want to play with confidence and play our game.”<br><br>Mark Giordano and Matthew Tkachuk look ahead to the start of the series tomorrow vs. Dallas. <a href=”https://t.co/kxiAVQ6qaD”>pic.twitter.com/kxiAVQ6qaD</a>

The Flames will need to follow a similar game plan if they hope to beat Jamie Benn, Tyler Seguin and the Dallas Stars.

“We’ve watched them play the last couple games and they’re playing very, very well right now,” said Stars head coach Rick Bowness. “They’re getting the goaltending. They’re getting the timely goals. They played Winnipeg, a team that was beat-up, obviously, with some key injuries, but they’re a very confident team right now and they’ve got some dangerous players.”

Speaking of dangerous, another Oilers’ castoff, goalie Cam Talbot, posted a 1.51 goals against average and a .945 save percentage against Winnipeg. He’s another big reason why the Flames advanced to the first round.

Many counted Lucic, Talbot and Co. out long ago. But they’re still alive and in the running.

“Nobody is satisfied with beating Winnipeg and getting into the final 16,” said Flames captain Mark Giordano. “We’ve gone through enough together, enough losses in the playoffs together, that we’re not satisfied. We want to move on. We want to keep going.”