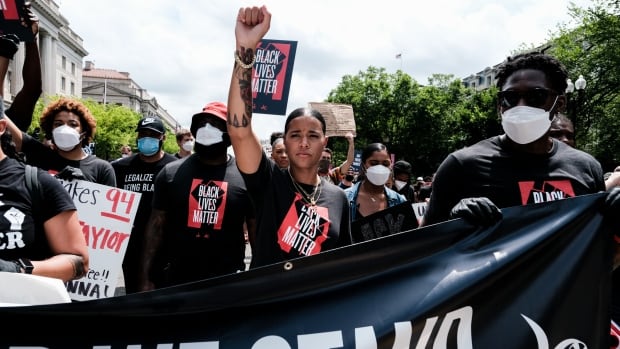 Major League Soccer and NBA players have been sporting t-shirts bearing the phrase during warmups and on the sidelines, while NBA and WNBA courts feature the words, in block letters and prominent as a sponsor logo, in plain view of TV cameras.

Some Major League Baseball diamonds had the BLM acronym stenciled into the grass behind the pitcher’s mound, and players kneeling during the pre-game anthem has become routine at NBA games.

Even the NHL, the whitest of North America’s major pro team sports, has integrated a campaign against anti-Black racism into its gameday experience. Video screens in Toronto and Edmonton feature the phrase “#WeSkateForBLACKLIVES,” and Minnesota Wild forward Matt Dumba made headlines with a poignant plea for racial justice before a recent game between Edmonton and Chicago.

You can call demonstrations like Dumba’s unprecedented or brave, but in the summer of 2020, you can also call them safe. As teams, leagues, and sponsors all embrace the language of racial justice, players don’t face the same backlash for pre-game demonstrations. In 1996 the NBA fined Mahmoud Abdul Rauf $32,000 for sitting out the national anthem. This month Dumba made his speech into a microphone that bore the NHL’s logo.

So credit the WNBA’s Atlanta Dream for staking out the final frontier of social justice risk.

Last week the Dream, along with the Phoenix Mercury and Chicago Sky, showed up at their games wearing t-shirts that read “Vote Warnock,” as in Raphael Warnock, the Democrat vying to represent Georgia in the U.S. Senate in a special election this November.

Republican Sen. Kelly Loeffler, an outspoken opponent of the Black Lives Matter movement and — crucially for WNBA players — a part-owner of the Dream. Taking a knee during the national anthem with the league’s blessing is still brave; picking a fight with the person who signs your cheques to make a point about fighting anti-black racism entails an even bigger risk.

But it’s not unusual for WNBA players, who brought anti-racism to the court long before it became mainstream and safe and trendy.

“We’re still citizens. We’re still able to vote. Our voice is just as important as anyone else’s,” said Atlanta Dream forward Elizabeth Williams on a media conference call last week. “Even years ago, when it wasn’t popular, we were fortunate that our league understood that our voices needed to be out there.”

This sparring session kicked off in early July when Loeffler, who was appointed to the U.S. Senate last November, wrote to the WNBA urging the league to stop using the phrase Black Lives Matter and distance itself from the movement.

“The truth is, we need less — not more politics in sports. In a time when polarizing politics is as divisive as ever, sports has the power to be a unifying antidote,” Loeffler wrote. “Now more than ever, we should be united in our goal to remove politics from sports.”

Except high-level sports have always been political.

Americans revere Jesse Owens not just because he won four gold medals at the 1936 Olympics, but because he did it in Berlin, in front of Adolph Hitler, and outran Nazi propaganda casting Aryans as a race of supermen.

And the 1980 U.S. men’s Olympic hockey team is legendary not only for overcoming long odds to win a gold medal, but for achieving the feat in the U.S. against the Soviet Union. The Miracle on Ice was also a resounding victory in the Cold War.

In 2018 Major League Baseball, it’s players’ association and the Cuban baseball federation reached a deal permitting MLB clubs to recruit players directly from Cuba. The setup would provide revenue for the system that produced some of the world’s best players, and cut drug cartels out of a lucrative black market for trafficked Cuban baseball talent. The following year U.S. President Donald Trump’s administration, at the urging of Republican Sen. Marco Rubio, rescinded the deal.

So if Loeffler wants to build a wall between politics and high-level sports, she should have started stacking bricks decades ago.

She also could have protested in 2016, when players from three WNBA teams triggered fines from the league after warming up wearing t-shirts reading #BlackLivesMatter and #Dallas5, to protest recent police shootings of unarmed Black people.

Or she could have objected to WNBA star Maya Moore sitting out the 2019 and 2020 seasons to join the campaign to free Jonathan Irons from a Missouri prison. Moore believed Irons, who was serving a 50-year sentence for burglary and assault, was wrongly convicted. To put Moore’s move in perspective, imagine Mike Trout or Kawhi Leonard or Connor McDavid skipping next season to work on a civil rights initiative.

In March, a judge vacated Irons’ 1998 conviction and prosecutors declined to try him again. Last month, Moore greeted Irons as he was released from prison after 23 years and explained why the result justified missing two WNBA seasons.

“If you’re not committed to being deeply committed, and invested over time, it’s not how legacies are made,” she told ESPN’s The Undefeated. “Legacies are made and held by deep, over-time commitments to people.”

This summer the WNBA and its players dedicated the 2020 season to Breonna Taylor, an EMT from Louisville killed in her sleep by a SWAT team in a botched pre-dawn raid. Officers had the wrong address. Neither Taylor nor her boyfriend, Kenneth Walker, was a suspect in any crime. Louisville police officer Brett Hankinson was fired three months after the fatal shooting. Two other officers involved were reassigned. None has been charged.

As the season tipped off, Layshia Clarendon of the New York Liberty explained why, during a summer in which anti-racism messages permeated pro sports, the WNBA would focus its activism on elevating Black women, “who are so often forgotten in this fight for justice, who do not have people marching in the streets for them.”

None of this activism began as explicitly political. The idea that Black people deserve equal treatment in the job market, or from law enforcement and the courts, hinges on fundamental human rights that, in theory, transcend politics. But Loeffler, who is running for election, framed the players’ activism as political, then argued it didn’t belong on the basketball court.

Her team responded as WNBA players often do — by fighting back.

When Dream players donned “Vote Warnock” t-shirts, so did members of the Chicago Sky and Phoenix Mercury, a group that included A-list performers like Britney Griner, Diana Tarausi and Skylar Deggins-Smith.

The countermove and its message were unambiguous and daring, but they weren’t novel.

For the WNBA players, they were on-brand.