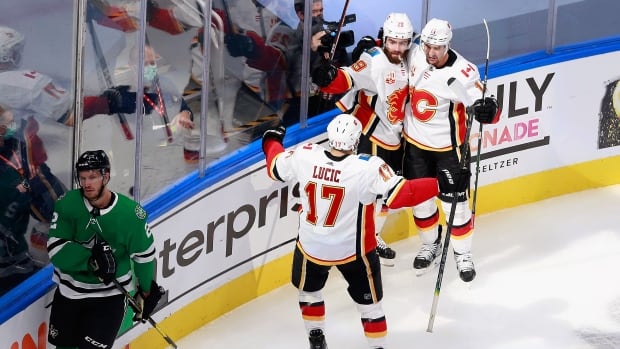 Dillon Dube scored twice in the first period and the Calgary Flames beat the Dallas Stars 3-2 in Game 1 of their first-round playoff series on Tuesday.

Rasmus Andersson also scored for Calgary, which advanced to the best-of-seven series by beating the Winnipeg Jets in four games in the best-of-five qualifying round.

Denis Gurianov and Jamie Benn scored for Dallas, which went 1-2 in the seeding round to earn the No. 3 seed in the Western Conference.

Dube and the Flames power play were the difference in the afternoon contest, held at Rogers Place in front of no fans due to the COVID-19 pandemic.

Rasmus Andersson’s snipe in the second period helped the Calgary Flames edge the Dallas Stars 3-2 in game 1 of their playoff series. 0:57

Calgary scored the first goal of the game midway through the opening period with Alexander Radulov off for interference. Milan Lucic threaded a cross-ice pass to Dube on the rush. Dube fired a low one-timer past the outstretched glove of Dallas netminder Anton Khudobin.

As the Flames celebrated, Radulov swore a blue streak at the refs as he skated back to the Stars bench.

The Flames were 5-for-17 with the man advantage in their series against Winnipeg.

Dube had a busy period. He later went off for cross-checking Dallas forward Jason Dickinson head first into the boards. (“That’s a dangerous play. I’m going to call it every time,” a referee could be heard barking at Dube afterward in the empty arena).

Dube jumped out of the penalty box and took the puck on a breakaway, but was foiled on the shot by Khudobin.

With less than two minutes to go in the frame, Dube undressed third-pairing Dallas defenceman Andrej Sekera. Blasting down the right wing, Dube went wide around Sekera, swooped in front of the net, held the puck and tucked it past a sprawled Khudobin.

Calgary Flames head coach Geoff Ward speaks to the media after his team advanced to the first round of the NHL playoffs. 6:04

Dallas pushed back in the second period, peppering Calgary goalie Cam Talbot with shots to even the score.

Midway through the period, Gurianov fired a wrist shot from the blue line that appeared to bounce off the back of Calgary defenceman T.J. Brodie and in.

Nine seconds later, Benn wristed a knucklepuck from the blue line that bounced in front of Talbot, under his stickside arm and in.

Calgary regained the lead late in the period, with Sekera again playing a leading role. Andersson activated off the rush and whipped the puck from the right faceoff circle. It deflected off Sekera’s stick and over Khudobin’s shoulder.

The game also featured a title bout of team super pests Corey Perry and Calgary’s Matthew Tkachuk. The two dropped the gloves off the draw in the first period and exchanged haymakers before Tkachuk knocked Perry down.

The two are famous throughout the league for antics, pre and post-whistle, that get under opponents’ skins. In the second period, Calgary’s Lucic mixed it up with Perry for shooting the puck after the whistle.

Khudobin started instead of the Stars’ No. 1 goalie, Ben Bishop. A three-time Vezina Trophy nominee, Bishop was out for two of three games in the round-robin seeding round but dressed for the Calgary contest. Khudobin looked sharp in the Stars’ final round-robin game, a 2-1 shootout victory over St. Louis.

The game was a microcosm of the Stars’ season: strong defence, not enough offence.

But the offence fell short, even with top scorer Tyler Seguin (17 goals, 50 points in the regular season) returning to the lineup. Seguin was deemed unfit to play for two of the round-robin games.

Dallas averaged 2.58 goals per game (26th in the NHL) in the regular season and scored just five times (once on the shootout) in three round-robin games.

But they allowed 2.52 goals per game on average. Only the Boston Bruins were stingier (2.39).

This is the first time these two teams have met in the playoffs since the Stars moved to Dallas. Calgary played the Minnesota North Stars in the final four in the spring of 1981, losing 4-2.