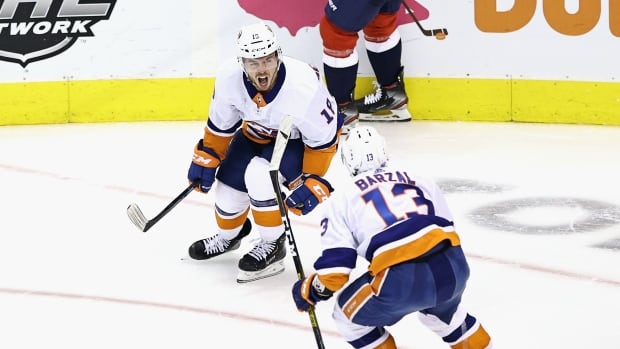 Trotz didn’t see anything wrong with Lee’s play in a 4-2 first-round series playoff-opening victory in which the New York captain set the tone with a big hit on Capitals play-making forward Nicklas Backstrom, and then scored a key goal in the Islanders rallying from a 2-0 deficit Wednesday.

“Playoff hockey should be right up Anders’ wheelhouse, if you will,” Trotz said. “He’s big. He’s strong. He scored an important goal. He had a hit. And he responded to [Tom] Wilson’s challenge. What more can you ask from a leader.”

Lee wound up getting into two fights, the first with defenceman John Carlson immediately after bowling over Backstrom with a heavy hit 2 1/2 minutes in. Then he fought Wilson later in the period in being targeted for the hit, which led to Backstrom not returning after seven shifts.

Braden Holtby’s giveaway cost the Capitals as they allowed the Islanders to comeback and win game one 4-2. 0:53

Carlson was more blunt in calling Lee’s hit as appearing “real dirty to me.”

Lee was penalized for interference after a shoulder-to-shoulder hit, in which Backstrom appeared to be looking the other way and didn’t have the puck.

“I tried to throw the brakes on a little bit there, but I caught him,” Lee said. “The end result after that was a penalty, a couple of fights. It was settled and then the game continued on.”

Jordan Eberle and Lee tied it at 2 by scoring 1:54 apart spanning the second intermission. Josh Bailey scored the go-ahead goal with the Islanders shorthanded 6:52 into the third period.

And Anthony Beauvillier capped a four-goal outburst in a game the Islanders overcame their own lack of discipline in allowing the Capitals seven power-play opportunities.

“I think we just give then breath,” Alex Ovechkin said. “That goal at the end [of the second period] obviously give them a little breath. But in the third period we can’t start like that.”

Eberle began the comeback by scoring on a snapshot from the high slot with 63 seconds left in the second period. Lee tied the game 51 seconds into the third by converting a rebound in front, and after Braden Holtby stopped Ryan Pulock’s blast from the right point.

Bailey and Brock Nelson caught the Capitals’ power-play napping in scoring the go-ahead goal, and Leo Komarov off for high-sticking.

Nelson began the play by lobbing the puck high into the air from the Washington blue line. He then raced in and disrupted Holtby’s bid to play the puck. Nelson then stripped Ovechkin in the corner before centring to a wide-open Bailey in front, from where he fired it inside the left post.

Semyon Varlamov stopped 24 shots for the Islanders who eliminated the Florida Panthers in four games of their best-of-five preliminary round series last week.

The Metropolitan Division champion Capitals were coming off a sluggish performance in a preliminary round-robin tournament in which they finished 1-1-1, managed just five goals and closed with a 2-1 win over Boston on Sunday.

“We just move on,” Ovechkin said. “Nothing you can do right now. We just going to learn from our mistakes.”

Carlson had two assists in returning after missing three preliminary round games with an injury and Holtby stopped 23 shots.

In having to kill off three power-play opportunities in the first period, the Islanders matched a franchise playoff low for shots in being outshot 7-2 over the first 20 minutes. New York managed two shots in one period twice before in the playoffs, both times against Washington in 1984 and ’85.

“We don’t want to be on the penalty kill if we can help it, and that wasn’t our intention that’s for sure,” said Trotz, in his second year with the Islanders after coaching the Capitals to win the Stanley Cup in 2018. “We’ll play five on five with anybody in the league, but I don’t want to give that power play anything. I’ve seen it up close for four years. they’re dangerous.”