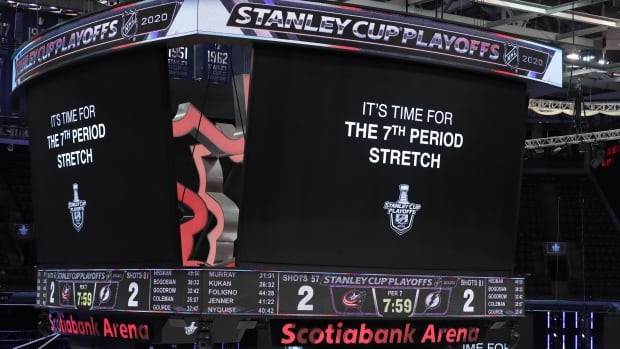 By the time he launched the last shot, Brayden Point was just trying to do anything he could to end the fourth-longest game in NHL history.

“I just see a rolling puck and I just throw it on net,” Point said after scoring 10:27 into the fifth overtime to give the Tampa Bay Lightning a 3-2 victory over the Columbus Blue Jackets in their playoff opener Tuesday.

“I’m not really aiming,” he added. “Just sling one there and lucky enough it finds a corner.”

Point scored from just above the left circle, beating Joonas Korpisalo after the goaltender made an NHL-record 85 saves. The 24-year-old forward also scored way back in the first period of Game 1 of the best-of-seven series.

Brayden Point scored 10:27 into quintuple overtime to give the Tampa Bay Lightning a 3-2 win over the Columbus Blue Jackets in the 4th-longest NHL game in history. 1:53

Vezina Trophy finalist Andrei Vasilevskiy bought time for Point and Co. with 61 saves for Tampa Bay. The teams combined for 151 shots — most in an NHL game since the league began officially tracking the statistic in 1955-56.

“It’s tiring for sure but then it gets fun at some point,” Point said. “I don’t know how many guys played a game like that, that long. It was an exciting one.”

The teams are meeting in the first round of the playoffs for the second straight year, with the Lightning looking to rebound from being swept 16 months ago by the underdog Blue Jackets, who became the first No. 8 seed to oust the winner of the Presidents’ Trophy in four games.

Pierre-Luc Dubois scored on the power play and Oliver Bjorkstrand added a goal late in the second period to give Columbus — the No. 7 seed in the Eastern Conference — a pair of short-lived leads in regulation.

Yanni Gourde had the other goal for the second-seeded Lightning, who got the game-winner from Point shortly after Columbus was denied a chance to potentially end the six-hour marathon with Cam Atkinson barrelling in on Vasilevskiy on a short-handed breakaway.

Tampa Bay defenceman Victor Hedman caught up to Atkinson, though, before pushing him to the ice while flicking the puck away. No penalty was called.

Columbus defenceman Seth Jones, who logged an NHL-record 65 minutes, six seconds of ice time, said the officials didn’t say why a penalty was not called.

“I’d like them to come up here and give an explanation,” Jones said.

Torotrella, meanwhile, looked ahead. Asked what advice he had given his team, which played an overtime game for the third time in six days.

“Get some rest and get ready to play the next game,” the coach said.

Blue Jackets goaltender Joonas Korpisalo stopped 85 of 88 shots he faced on Tuesday to set a modern day NHL record, besting Kelly Hrudey’s total of 73 back in 1987. 1:15

The Blue Jackets expect to rebound.

“You’re going to lose games, and this was just a long overtime game that we lost. It’s no different,” Bjorkstrand said. “We’ve just got to bounce back and be ready for the next game.”

While there’s no denying last season’s early exit from the playoffs has been a source of motivation for much of the past 16 months, coach Jon Cooper and the Lightning insist this series is about a lot more than redemption.

After all, both teams have decidedly different looks, with Artemi Panarin, Sergei Bobrovsky and Matt Duchene no longer with Columbus, and Pat Maroon, Kevin Shattenkirk and Blake Coleman bolstering Tampa Bay’s talent-laden roster.

The Lightning played Game 1 without injured captain Steven Stamkos. But Hedman, who appeared to twist an ankle during last Saturday’s round-robin finale against Philadelphia, skated and had an assist on Tampa Bay’s first goal.

With goaltender Elvis Merzlikins ruled out for the opener, Korpisalo started for Columbus and kept his team close by stopping 26 of 27 shots in the first two periods. The Lightning pulled even at 2-all on Gourde’s goal just 23 seconds into the third, but weren’t able to finish it off in regulation despite outshooting the Blue Jackets 41-26 up to that point.

“You just try to go save by save, not thinking too much,” Korpisalo said. “I think I felt pretty good. The boys, they were battling hard in front of me.”

The teams created numerous scoring opportunities in overtime, but Korpisalo and Vasilevskiy remained on top of their games.

“Korpi, he was fantastic,” Tortorella said.

“It was an unreal performance by both teams, but especially by both goaltenders.,” Hedman said. “They don’t get to sit on the bench for a couple minutes, they have to be sharp the entire time.”

Meanwhile, the opening game of the Boston Bruins-Carolina Hurricanes NHL playoff series that was to be played on the same sheet of ice was pushed back to Wednesday morning.

The second NHL game of the day, between the Calgary Flames and Dallas Stars in Edmonton, started at 5:30 p.m., and finished well before the conclusion of Tampa-Columbus, which began at 3 p.m.

All post-season games in the NHL are being played in Toronto and Edmonton in front of no fans during the COVID-19 pandemic.

During the first round, the league had put at least 4½ hours between the start of games in each city to try to avoid postponements.

However, there will be only four hours between the start of Boston-Carolina and a New York Islanders-Washington Capitals game (3 p.m.) on Wednesday in Toronto.