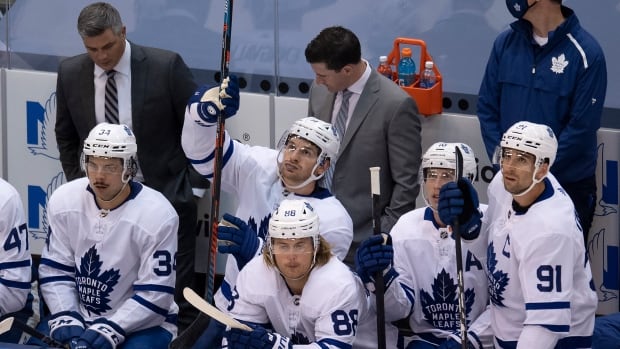 One by one, the Maple Leafs sat down in front of their laptops, iPads and smart phones to face the music — from a distance via video conferencing, of course — following another season that started with big dreams and ended with a resounding thud.

Long faces and monotone responses greeted reporters’ questions about how a team with so much skill could once again fall flat when it mattered most.

There were no excuses, but rather a feeling that Toronto remains on the right path with a young, talented core still only scratching the surface. There’s more ownership from the roster’s highly-paid, 20-something stars when things go wrong, a better understanding of what it takes to win, improved commitment to each other, and growth across the board, the Leafs insisted.

There certainly was a lot of talk Wednesday.

Auston Matthews speaks to the media during his end of season media availability. 9:41

“Words aren’t going to fix this,” he said. “The things that we say aren’t what’s going to get this done. It’s going to be the work that we do.”

That’s already started following Toronto’s five-game loss to the Columbus Blue Jackets in the qualifying round of the NHL’s restart to its pandemic-hit campaign.

The high-powered Leafs, defensively deficient much of a season that was halted in mid-March because of the COVID-19 pandemic, were better in their own end. The problem was they didn’t offer much offensively throughout the best-of-five series with Columbus, and especially in an elimination game for the second straight year with Toronto falling 3-0 in Sunday’s finale at Scotiabank Arena.

“We can let this discourage us,” Shanahan said. “Or we can allow this to make our players and our entire staff more determined and more mentally tough to take a bad situation and grow from it.

“Right now the focus is on how we get better and what changes we have to make.”

With north of $40 million US committed to Toronto’s Big 4 forwards annually through 2023-24, there appears to be little wiggle room to improve the shaky blue line or add depth unless big moves are made, especially with the $81.5-million salary cap staying flat for the foreseeable future.

And it didn’t sound like anything earth-shattering will be in the cards ahead of the 2020-21 campaign, whenever it begins.

The Leafs have fallen short in their attempt to out-skill tougher, more physical opponents the last three years, losing a pair of seven-game, first-round series to the Boston Bruins before the latest setback against Columbus, which technically means Toronto missed the playoffs for the first time since 2016.

“Having a good regular season really isn’t cutting it anymore,” said Matthews, who scored a career-high 47 goals. “We’ve got to figure out the playoffs and get out of this first round. Four years in a row is pretty frustrating and a little bit embarrassing.”

Leafs defenceman Jake Muzzin — often the team’s conscience in difficult moments — said getting past that hurdle and beyond comes down to will and desire.

“If we’re not learning from this, then we’re really losing,” said Muzzin, who suffered a series-ending injury in Game 2. “I hope guys understand that we’ve got to dig into the next level and that’ll bring this team further along.”

Dubas, rightly or wrongly, has been painted as an analytics-driven executive intent on remaking how a team can succeed in the NHL, but he pushed back when asked if his vision for the Leafs has to change.

“I don’t find myself transfixed on one thing,” said Dubas, who added toughness in Muzzin and bruising winger Kyle Clifford the last two seasons. “[The media] thinks I have one way of going about things and that it’s never changing.

“The vision for me always has to be changing.”

Zach Werenski and Liam Foudy’s tallies were more than enough to push Columbus to their 3-0 victory over Toronto. 1:57

He also gave an impassioned response, perhaps the most direct of his time with the Leafs, in defence of Marner following the loss to the Blue Jackets.

“I don’t get the criticism of Mitch Marner one bit,” said Dubas, who also offered a simple “No” when asked if he misread the potential of Toronto’s core. “He’s a guy that plays his ass off every night, has got tremendous skill, tremendous intensity, plays every situation for us … and everything that he does wrong, people jump all over him.

“It’s among the most idiotic things that I see done here.”

The Leafs have gone home early every year since Shanahan — and his so-called “Shanaplan” — was hired in 2014. And while not his fault, Toronto hasn’t won a series in 16 years and has a Stanley Cup drought at 53 years and counting.

“No one’s feeling sorry for ourselves,” Shanahan said. “It’s really about finding solutions, so that we get over that hump. We really do believe in this group.

“We understand why Toronto fans are frustrated. They’re entitled to be. They should be.”

WATCH | Taking a look at the crazy start to Columbus-Tampa series:

Leafs winger Zach Hyman, who grew up in the city, agreed the anger is justified.

“But in the short term, it sucks. And it’s gonna suck for a long time.”

The Leafs have regressed in the standings since topping out at 105 points under head coach Mike Babcock in 2017-18. Toronto got to 100 points last season, and was on pace for 95 in 2019-20 before the pandemic.

Bumps in the road

Dubas used one of the bullets in his chamber when he fired Babcock in November, replacing him with the like-minded Sheldon Keefe, whom he’s worked with since junior. The hope is with a full training camp and regular season, the Leafs will be better prepared when the chips are down.

“I would love for the progress to be linear,” Dubas said. “There are lots of teams that go through significant ups and downs on their way to getting to where they all want to go.”

Fans and local media have heavily criticized the Leafs since the loss to Columbus. The perception is Toronto isn’t tough enough, doesn’t care enough and doesn’t have the mental fortitude to deal with the pressure of big moments.

“We don’t really care what other people think or how far away other people think we are or the articles that they’re gonna write about all the things that we need,” Matthews said. “We believe in our management and in our staff and the players on this team and in this organization that we’re going to power through this adversity and we’ll break through eventually.”