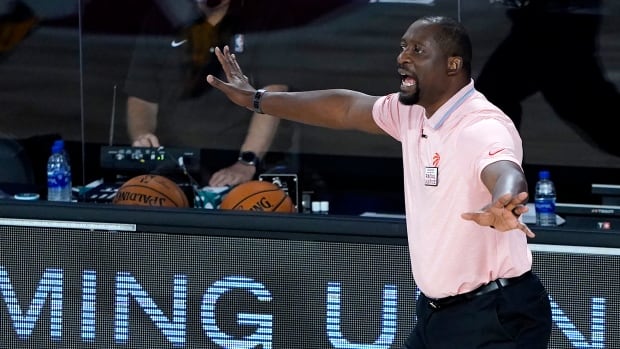 Whether it’s as a player or coach, Adrian Griffin said there’s no better practice than actual games.

The Toronto Raptors assistant was promoted to head coach for Wednesday’s seeding-round game against the Philadelphia 76ers, and planned to cherish the opportunity.

“Well, I think coach [head coach Nick Nurse] is an awesome human being. He understands that a coach like me needs some reps at being a head coach,” Griffin said prior to tipoff at Walt Disney World Resort near Orlando, Fla. “He knows my ambitions and he wants to see me grow as an individual on and off the court.

“Definitely just an awesome gesture by coach, he approached me with it and it just kinda shows what kind of character that coach Nurse has.”

The Raptors said it’s the first time the team has had a substitute head coach since Feb. 13, 2008 when Jay Triano stepped in for Sam Mitchell after the death of his father-in-law. It was the first time a Canadian had coached a regular-season NBA game. The Raptors won 109-91 over New Jersey.

The 46-year-old Griffin, who played nine seasons in the NBA, was hired by the Raptors in 2018 after assistant coaching stints with Milwaukee, Chicago, Orlando and Oklahoma City.

What did he hope to glean from his temporary promotion?

“Well, just like when athletes and basketball players are training in the summer, there’s nothing comparing to game condition,” he said. “You can work out all you want, but until you get in those games and you get up and down the court, there’s a difference. It’s really equivalent to an assistant coach moving over to that chair. You do all the training that you can and practise, but it’s good to get those game reps.”

Nurse isn’t the first Toronto head coach to hand over his duties for a game with no meaning in the standings in recent years.

In his final game with the Blue Jays in 2018, John Gibbons gave managerial duties to veteran Canadian catcher Russell Martin.

“There’s a reason why we’ve had success over the years,” Griffin said.

He also credited the numerous coaches he played for and coached with including Don Nelson, Rick Pitino, Jeff Van Gundy, Tom Thibodeau and Billy Donovan.

“The list goes on, man, and I’ve been fortunate to be under that type of calibre of coaching,” Griffin said.

The Raptors were 51-19 heading into Wednesday’s matchup with Philly, their penultimate game in the seeding round. They’d clinched the No. 2 seed in the Eastern Conference, and will face Brooklyn in the first round of the playoffs.

“These guys are phenomenal, we have great players, they know the game-plan, they know how to play, they’re proven winners,” Griffin said. “I’m not trying to reinvent the wheel. I’m just gonna go out there, execute the plan that coach Nurse has really provided a great blueprint to follow and just kinda let the cards fall where they may.”

Stanley Johnson scored the tiebreaking basket in the lane with 4.9 seconds remaining, giving the Raptors a 125-121 victory over the 76ers on Wednesday that made a winner of Griffin.

Nurse let his assistant coach run the team and they responded with a late run from the bottom of their bench, long after Philadelphia’s Joel Embiid had ended his night, to improve to 6-1 in the restart.

“Tomorrow back to reality, but it was an awesome feeling,” Griffin said.

Kyle Lowry and Chris Boucher each scored 19 points for the Raptors. Norman Powell had 17 and Pascal Siakam finished with 15.

Stanley Johnson secured the win for the Raptors in a game that saw them erase a 16 point deficit to beat Philadelphia 125-121. 0:59

Embiid played just the first half after missing a game with a left ankle injury. He also took a hit on the hand in this one and finished with five points in 14 minutes.

Tobias Harris scored 22 points and Furkan Korkmaz had 21 for the 76ers, who became locked into the No. 6 seed in the Eastern Conference earlier Wednesday, securing a first-round matchup against the Boston Celtics.

They’ve already lost All-Star Ben Simmons to knee surgery and hope Embiid will be at his best, but will have to be ready no matter who they have.

“We’ve had different lineups from the start to now and if you were to look at our team, a big word for us would be just being able to adapt,” Harris said. “To adapt to who’s in, who’s out, how we’re going to play and what we’re going to do moving forward.”

The Raptors pulled it out for Griffin by rallying from 10 down midway through the fourth quarter, and six down with under 2 minutes to play.

He got a chance to draw up a winning play after calling timeout with 18 seconds left. The 76ers blocked a shot but it came right back to Johnson, who softly put it in. The Sixers then threw away the ensuing inbounds pass.

Lowry said the players forgot to give Griffin a game ball, but the Raptors expect he’ll get a head coaching opportunity in the NBA soon and will get plenty of other chances.

“We were really excited for him,” Powell said. “We wanted to go out there and play hard and help him get his win as a head coach. I thought we did that throughout the game.”