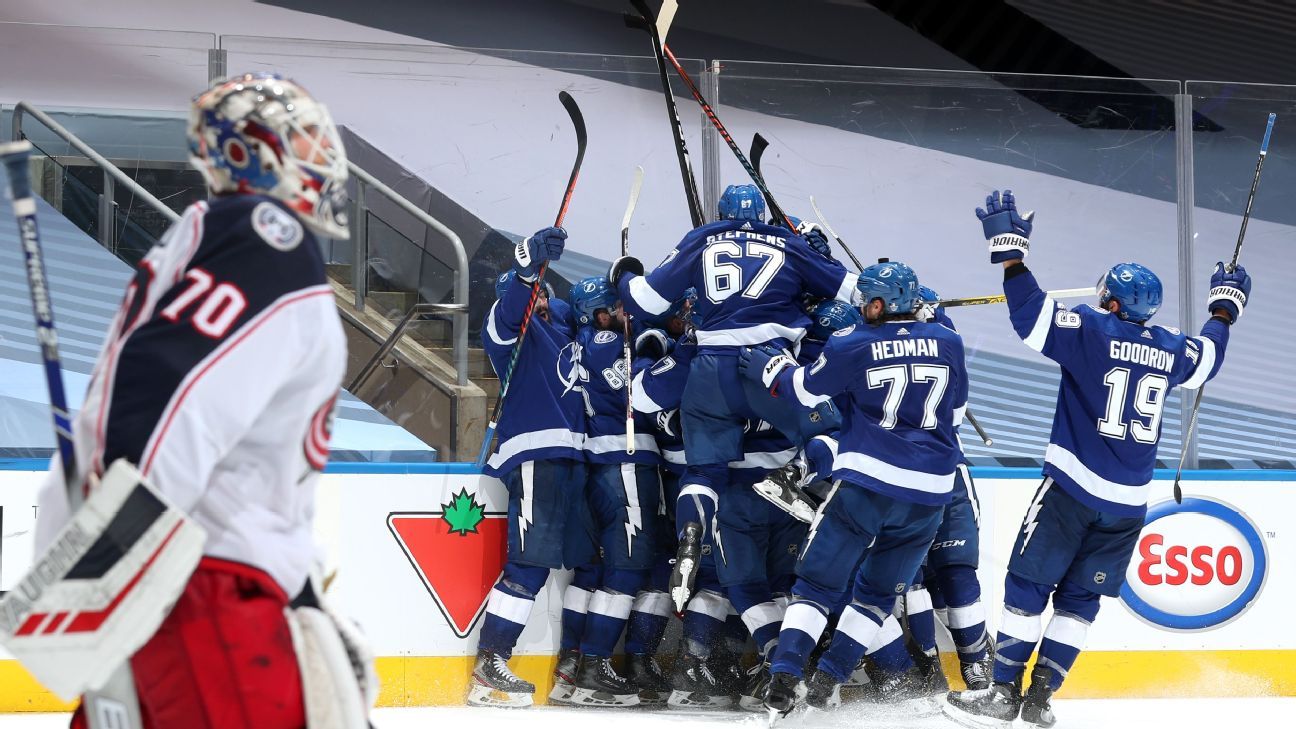 The first game of the first round of the 2020 Stanley Cup Playoffs began at 3 p.m. ET on Tuesday, between the Tampa Bay Lightning and Columbus Blue Jackets. It didn’t end until the fifth overtime, which was 6 hours, 13 minutes later in real time.

Along the way, playoff records for saves (85, Joonas Korpisalo) and ice time (65:06, Seth Jones) were set. Tampa Bay’s Brayden Point ended it, and then looked as if he were about to pass out from exhaustion in the postgame interview.

And oh yeah, there were some excellent takes on social media throughout the proceedings.

Here are the best reactions to the epic clash:

First came a series of jokes about how long the game was lasting:

Gonna be a vaccine before this game ends. #StanleyCupPlayoffs

Technically no one has left their seats to beat traffic.

ARE YOU NOT ENTERTAINED?! pic.twitter.com/DljFc4Gl05

Then the video board operator got in on the fun at the rink in Toronto:

The Boston Bruins and Carolina Hurricanes were supposed to be starting the first game of their series at 8 p.m., but there was a slight problem:

Hey @NHL, not to tattle but we were supposed to play at 8:00 and the @BlueJacketsNHL and @TBLightning won’t get off the ice

So then, this happened:

Due to the length of the Lightning-Blue Jackets game, Game 1 between the @NHLBruins and @Canes – originally scheduled for 8:00 p.m. ET today – has been rescheduled for Wednesday, Aug. 12, at 11:00 a.m. ET.

Age jokes were made:

Even opposing players had to give it up for the effort being put forth by the Lightning and Blue Jackets:

Have to tip your cap to the boys on CBJ and TBL tonight. This is unreal. Wow. pic.twitter.com/e1Evs5wSWk

The Calgary Flames and Dallas Stars started a game at 5:30 p.m. ET — 2½ hours after this one. The Flames won 3-2, and the postgame show was wrapped up before the Lightning and Blue Jackets game reached a final:

.@BParkerTV wraps up the win in Game 1 … somehow before the @BlueJacketsNHL and @TBLightning game is done. pic.twitter.com/YuhC215yjf

But, all good things must eventually come to an end, and so it was with this game, as Point found the net at 10:27 of overtime No. 5:

A historic hockey game comes to an end.@BraydenPoint19 nails the game winner for the @TBLightning in the FIFTH OT. #StanleyCup pic.twitter.com/QxV7T4HEMg

WE FINALLY HAVE A WINNER! The @TBLightning win in the fifth overtime! #StanleyCup pic.twitter.com/aFVS2pHjdi