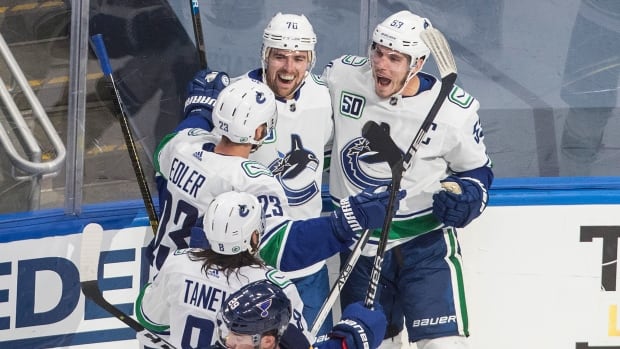 J.T. Miller, Elias Pettersson and Troy Stecher also scored for Vancouver while David Perron and Jaden Schwartz replied for St. Louis. Vancouver has a 1-0 lead in the best-of-seven series. Game 2 is set for Friday night.

Jacob Markstrom made 29 stops for the win.

The Canucks were making their first playoff appearance since 2015, having defeated the Minnesota Wild in the qualifying round.

They never trailed in the game.

The teams swapped mirror-image power-play goals in the first period.

Horvat opened the scoring about five minutes in when he one-timed a Hughes’ feed from the top of the left face-off circle past St. Louis goalie Jordan Binnington.

St. Louis replied with under four minutes to go. Perron half-slapped a pass from Brayden Schenn from the top of the right circle high over the glove of Markstrom.

Vancouver regained the lead on the power play midway through the second period. Pettersson whipped the puck under the bar off a goalmouth scramble for his second goal in return to play.

The Blues tied it just over a minute later when Schwartz tipped the puck past pinching Canuck defenceman Chris Tanev at the Blues blue line, then barrelled in on a breakaway and beat Markstrom with a nifty backhander through the five hole.

Vancouver took the lead for good almost six minutes into the third. Stecher raced down the right wing and wired a slapshot from the face-off circle under Binnington’s arm for his first of the post-season.

Then Horvat, entering the Blues zone with speed, turned Blues defenceman Vince Dunn inside out, raced in and fired a wrist shot past Binnington on the blocker side.

Miller added the fifth goal on the power play with less than 40 seconds to play.