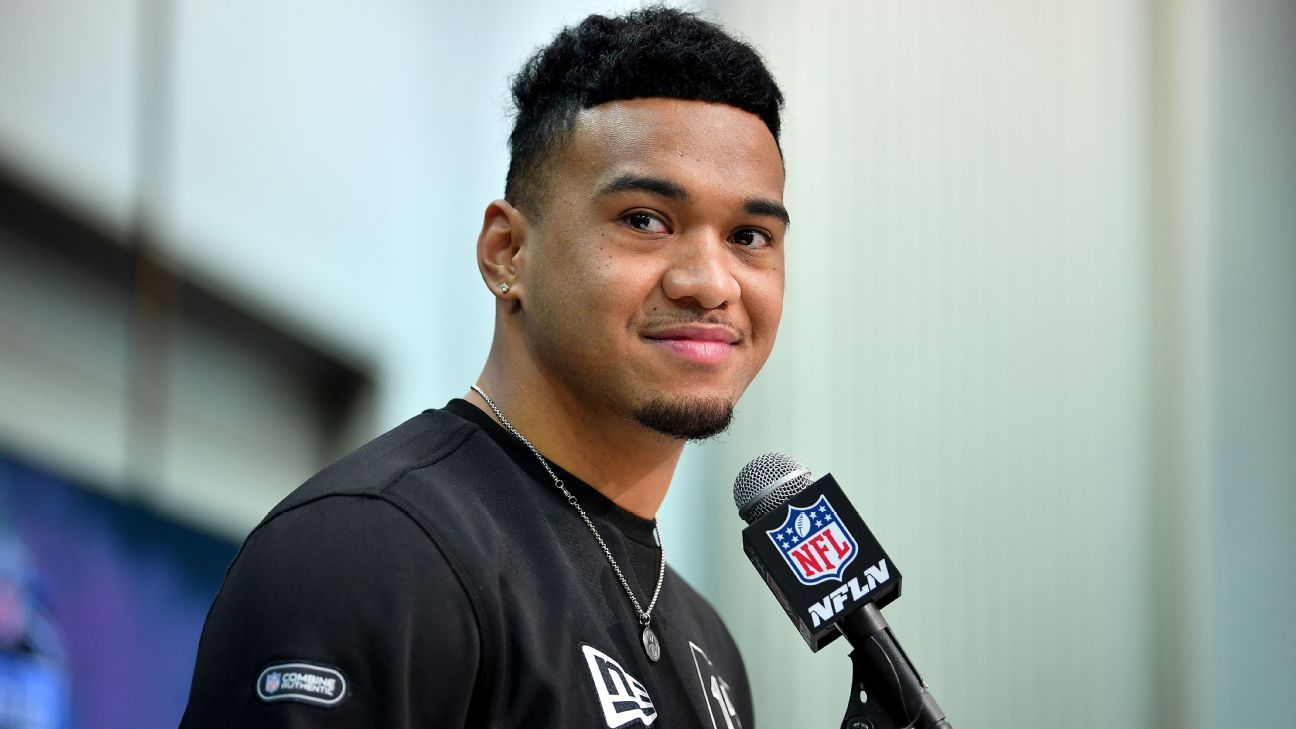 Tua Tagovailoa walked into a meeting room with a contagious smile, popping his aqua Ryan Fitzpatrick jersey in the Zoom camera for reporters like it was a prized Christmas gift.

“What up, y’all like my jersey?” Tagovailoa said. “I thought I could break the ice with you guys by wearing the Fitz jersey.”

That’s the Miami Dolphins‘ new quarterback at heart — a young guy with a jovial personality who is getting along great with Fitzpatrick, the veteran incumbent quarterback and his main competition for the starting job.

Tua Tagovailoa shows up to his first group media availability since draft weekend with a big “what’s up” rocking a Ryan Fitzpatrick jersey. As if Dolphins fans can love him anymore. pic.twitter.com/sA7GXkV7dh

Tagovailoa and Fitzpatrick have been together in person for just over two weeks, yet they are parading around publicly like best pals. It’s a great sign for the Dolphins, who view Fitzpatrick as the perfect bridge to Tagovailoa — their future franchise quarterback.

“To start it off with Fitz, very, very down-to-earth person, very humble,” Tagovailoa said. “To be a professional like that is mind-boggling how down-to-earth he is. This guy just gets it. I don’t know what it is. He just gets it.

“That saying goes true. It says if you want to get somewhere fast, you go alone, and if you want to go somewhere with purpose, you bring people with you. I think Fitz has done a tremendous job of trying to shape and mold me, and Josh [Rosen] as well. It’s been pretty cool to go through that process with him.”

Earlier this month, Fitzpatrick said, “I know I’m the placeholder” for Tagovailoa while promising to be an open book to the rookie quarterback and third-year signal-caller Rosen with his advanced knowledge of new offensive coordinator Chan Gailey’s scheme. Mutual respect and admiration is the key for an ideal Dolphins quarterback room.

Tagovailoa also lit up when he discussed virtually meeting Fitzpatrick’s immediate family — his wife and seven kids — for the first time earlier this week.

“While we were on FaceTime, everyone was scattered around the house. He introduced me to his kids then his wife. He said this is it, this is everyone, this is my family. Then lo and behold, he forgets two of them,” Tagovailoa said.

All eyes will be on Tagovailoa when the Dolphins kick off padded practice Monday. It will be his first football action in full pads since his hip injury in November. Tagovailoa said he is 100% and will be fully cleared to practice, but there is one last step to accomplish that he might not achieve until his first NFL game action: getting tackled.

“You just never know until it actually happens. I won’t know the feeling until I actually do get tackled. It’s almost like the trial-and-error kind of thing,” Tagovailoa said. “You gotta go out and do it in order to know if it does hurt or it doesn’t. That’s pretty much what I can say. But as far as I how I feel right now, everything is going well.”

The buzz in South Florida around Tagovailoa couldn’t be louder, but the young quarterback shook off the added pressure and attention that comes with potentially being the team’s biggest star since Dan Marino.

“My focus right now is just try to get into the playbook, try to understand what we’re doing offensively and build relationships with the guys on the team,” Tagovailoa said. “I definitely believe Coach Flo [Brian Flores], Chan, [quarterbacks coach] Robby [Brown], all those guys that are going to be making their decisions, they’re going to put the team in the best position they think is possible. If that means supporting someone or not, that’s what it’s going to be.”