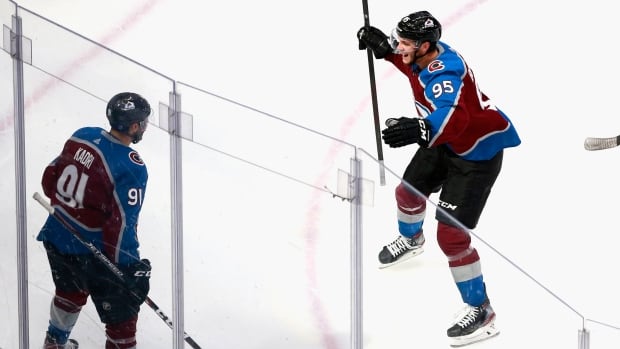 The Colorado Avalanche expected a big push from Arizona after the Coyotes spent most of Game 1 on their heels.

Colorado withstood the early blows, counter punched with a couple of goals and delivered the late knockout shot to take a commanding lead in the series.

Andre Burakovsky scored late in the third period, Philipp Grubauer stopped 30 shots and the Colorado Avalanche beat the Arizona Coyotes 3-2 on Friday to take a 2-0 lead in their Stanley Cup playoff series.

“I thought today we were a little too distracted as the game went on and kind of reeled it back in after the second period, kind of got back what we needed to do,” Avalanche coach Jared Bednar said. “The third wasn’t perfect either, but at least we were focused on what we had to do.”

The Coyotes were far more aggressive after being tentative against Colorado’s offensive firepower to in the opener.

Andre Burakovsky scored with 2:53 remaining in the third period, as the Colorado Avalanche defeated the Arizona Coyotes 3-2, and extended their series lead to 2-0. 1:13

The Avalanche still found ways to score early in the opening two periods on goals by Nathan MacKinnon and Tyson Jost.

Arizona responded each time, tying it on a goal by Clayton Keller in the first and Michael Grabner in the second.

The Avalanche revved up in the third period and Burakovsky scored with 2:53 left when a shot by Kazem Kadri hit Arizona defenceman Jakob Chychrun’s shin pad, leaving left goalie Darcy Kuemper out of position.

Colorado, the Western Conference’s No. 2 seed, is 13-1 all-time in playoff series with a 2-0 lead as the best-of-seven series heads to Game 3 Saturday in the Edmonton bubble.

“They outworked us in our D zone,” MacKinnon said. “I actually thought we played well offensively, had some good looks, so good possession time. Definitely, our compete level will go up tomorrow.”

The Coyotes had the early jump, fought and back both times the Avalanche scored and Kuemper stopped 25 shots. Better than the opener, just not good enough with a short turnaround before Game 3.

“Played a good hockey game. That’s more like it,” Coyotes coach Rick Tocchet said. “I’m proud of the way they played. They were in their faces. That’s more like the way we need to play, but we would like to get that next goal.”

Colorado won the opener with three late goals in 1:23 after being stymied by Kuemper for more than 2 1/2 periods.

The Coyotes spent most of the game on their heels, managing just 14 shots.

Arizona buzzed early in Game 2 with some big hits and some good scoring chances.

One mistake gave Colorado the lead.

Taking advantage of a neutral zone turnover, MacKinnon had a clear run up the left side of the ice and beat Kuemper with a wrister to the glove side.

The Coyotes stuck to their attacking game plan after the goal and tied it when a shot by Keller caromed off Colorado defenceman Samuel Girard’s stick past Grubauer.

The Avalanche scored another early goal in the second period, when Jost tipped a shot by Cale Makar that was going well wide past Kuemper.

“Me and Cale kind of made eye contact, I presented my stick, I was hoping he would shoot for it there,” Jost said. “It was a great play by him, that’s what great defencemen do. I was lucky to get a stick on it and redirect it in.”

The Coyotes responded again, tying it less than two minutes later when Colorado failed to pick up Grabner, who skated freely into the crease and beat Grubauer to the glove side.

Arizona had some good chances in the third period, including a shot that clanged off the post, but the Avs scored the last goal to take a commanding lead in the series

“The effort was better, we got a lot more pucks to the net, we played more like we wanted to, but the result’s still the same,” Coyotes captain Oliver Ekman-Larsson said. “We’ve got to figure it out for tomorrow.”