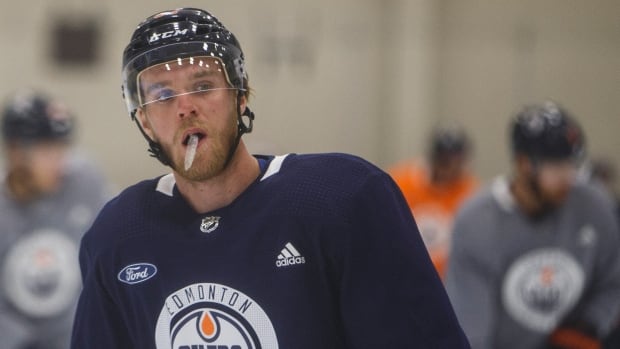 Edmonton Oilers captain Connor McDavid still wasn’t ready to sift through the ashes of an early exit from the NHL post-season a week later.

However, McDavid did agree with general manager Ken Holland’s assessment that Edmonton’s defence wasn’t stout enough against Chicago in the best-of-five qualifying round.

“Teams that win are teams that defend,” McDavid said Friday during a media conference call. “We haven’t seemed to figure that out yet. It’s not where it needs to be.”

WATCH | McDavid looks for silver lining after being eliminated by Chicago:

Connor McDavid and Ryan Nugent-Hopkins took questions from the media after being eliminated from the NHL qualifier by Chicago. 6:09

Under a new GM and new head coach Dave Tippett this season, the Oilers were less porous due to a penalty kill that vaulted from 30th in the NHL in 2019 to No. 1.

Edmonton was also marginally better defending five-on-five averaging 2.16 against per game compared to 2.18.

But the hub-city hosts allowed three power-play goals in a 6-4 loss to Chicago to start the series at Rogers Place.

Edmonton was up a goal each game. The Oilers led 3-2 heading into the third game’s final period that ended 4-3 in favour of Chicago.

“I think we took a step in the right direction knowing what we have to do to be successful,” McDavid said.

“We did it most the regular season and obviously when it came time when it mattered most, we dropped the ball.”

The 23-year-old led all scorers in the NHL’s re-start with five goals and four assists in the qualifying round, including a hat trick in Game 2.

Teammates Ryan Nugent-Hopkins and Leon Draisaitl produced a combined five goals and nine assists between them.

Holland told media earlier this week goaltenders Mike Smith and Mikko Koskinen didn’t perform as well as the duo did in the regular season, but the GM also felt defence was a team responsibility.

“At the end of the day, we gave up too many goals,” Holland said.

McDavid requires more time to fully analyze a season he and the franchise anticipated would be longer than it was.

“When it’s so sudden, it’s very easy to be frustrated and you’re just not thinking clearly,” McDavid said. “You need to clear your head first. Take the positive and the negatives and figure out what went wrong.

“I wish I had an answer for you, but obviously we’re missing something. I’m not sure what that is. And I’m sure everyone’s going to go back and regroup and try to figure out that exact question.”

McDavid, from Richmond Hill, Ont., is a generational player who won the NHL’s scoring race at age 20 and 21. He’s seen the post-season just twice in his five years in the league.

Oilers bench boss Dave Tippett spoke with the media after Edmonton’s disappointing exit prior to the NHL playoffs. 9:11

The Oilers reached the second round in 2018 and fell short of the first round in their own arena this summer.

“There’s a taste in everyone’s mouth that no one likes,” Oilers defenceman Darnell Nurse said. “You need to find a way to not have that taste and we’ve had it four out of the five years here.

“It was great to get to a point where we were in this bubble and playing for our lives every night, but we weren’t at the level that we needed to be to extend it.”

McDavid offered Tippett a vote of confidence in the latter’s first season behind the Oilers bench.

“Everyone thinks he’s got that stereotype of being a defensive-minded coach, and he is, but he still promotes offence as well. I really like where systems are at.

“On a personal level, I think he does a great job of building relationships with his players. Definitely like working with Tip.”