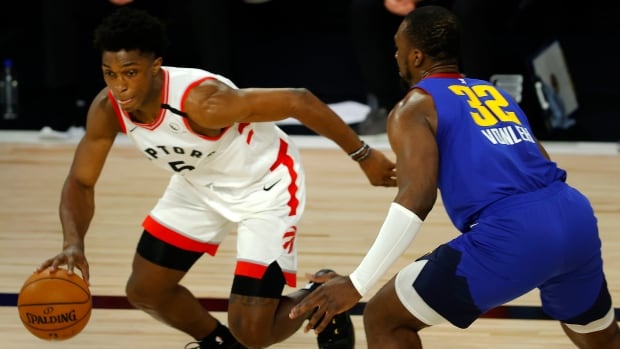 Late in the Toronto Raptors’ seeding-round finale Friday, Stanley Johnson fed Paul Watson for an alley-oop dunk that said plenty about the game — and even more about the defending NBA champions.

The Raptors sat four of their five starters against the Denver Nuggets, but it didn’t matter. Johnson scored 19 of his 23 points in the second half, while Watson added 22 and the Raptors beat the Nuggets 117-109.

The Raptors now turn their attention to the Brooklyn Nets, who they face in Game 1 of the opening round of the playoffs on Monday. And the Raptors’ work ethic, which was on full display again Friday, sets them up well for a long post-season run, coach Nick Nurse said.

“We’ve got to play hard, that’s kind of who we are and if we can do that, we feel that we’re hard to beat. A lot of things have to go wrong for us to lose a game,” Nurse said. “Then when you kind of multiply that out over a series and four times, we hope that if we’re going to compete and play hard to the level we can, we should be in there with a chance in every series really.”

Five months after the league was shuttered by COVID-19, the Raptors clearly haven’t missed a beat, going 7-1 through the eight seeding-round games despite having the toughest schedule of the 22 teams in the NBA’s bubble at Walt Disney World. Their 53-19 record will stand as second-best in the NBA behind Milwaukee, and they finished with a franchise-high 73.6 winning percentage.

Norman Powell had 15 points Friday, while Terence Davis had 14, Matt Thomas chipped in with 12, and Malcolm Miller scored 10.

Toronto Raptors two-way player Paul Watson scored an eye-popping 22 points as the Toronto Raptors ended their regular season with a 117-109 win over the Denver Nuggets. 1:16

The Raptors led by as many as 16 points before taking a nine-point advantage into the fourth quarter. Johnson, who’s never managed to find a solid foothold in the NBA since he was drafted eighth overall in 2015, hit three three-pointers and a floating bank shot during a span of less than four minutes in the fourth quarter.

The Nuggets pulled to within seven but Watson, who signed a two-way deal with the Raptors and Raptors 905 in January, replied from long distance the stretch the Raptors’ lead to 10 with just under two minutes to play.

“[The trust from Nurse] starts really in the practice gym, working on our individual games, the things he sees us do each and every day,” Watson said. “We go out there and we don’t do anything that we’re not working on outside of our role or what we’re capable of. And when it’s time to play, we get in there and do those things and execute. That’s where the trust comes.”

His alley-oop had the Raptors veterans on their feet celebrating.

PJ Dozier had 20 points to top Denver (46-27). Jamal Murray of Kitchener, Ont., who missed Denver’s first four games in the bubble with a hamstring injury, had 11.

Nurse summed up the interrupted regular season as “pretty good.”

“Probably a lot of people didn’t expect us to have this kind of season. A lot of guys stepped up. A lot of growth for a lot of players. I think our defence was great. There was a lot of resiliency considering we had a lot of injuries, too,” he said.

Toronto’s success came despite losing Kawhi Leonard and Danny Green to free agency last summer. The Raptors were also pummelled by injuries, their 219 total man games lost to injury ranking them fifth worst in the league. The team’s top five scorers all missed at least 10 games each with injuries.

“Just a good kind of top-to-bottom effort by the crew for certainly the first 60-plus games, and then to re-gather and keep it rolling once we got here, it’s good,” Nurse said. “It’s a joy to be around this team.”

Centre Marc Gasol was the only regular starter to play Friday. In a bubble management move, Kyle Lowry, Fred VanVleet, and Pascal Siakam sat out for rest. Serge Ibaka and OG Anunoby both took the afternoon off minor knee swelling.

Valuable experience ahead of playoffs

The last three games have been a great chance for the young players to some experience before the playoffs tip off Monday.

“Excited man, but at the same time try to stay ready,” Davis said. “This is my first playoffs, these guys are vets, just trying to do the right things off the court as well, sleeping, eating right, just doing some of the little things right to make sure I’m staying ready for when my number’s called.”

Davis led the way with 12 points in the first quarter, and the Raptors led 31-23 to start the second.

The Raptors took a 16-point lead early in the second after an 8-0 run, and they led 58-50 heading into the halftime break.

The Raptors had lost their previous three games to Denver, including a 133-118 defeat on March 1. It was the lone loss on Toronto’s five-game road trip that ended two days before COVID-19 shut down the league.