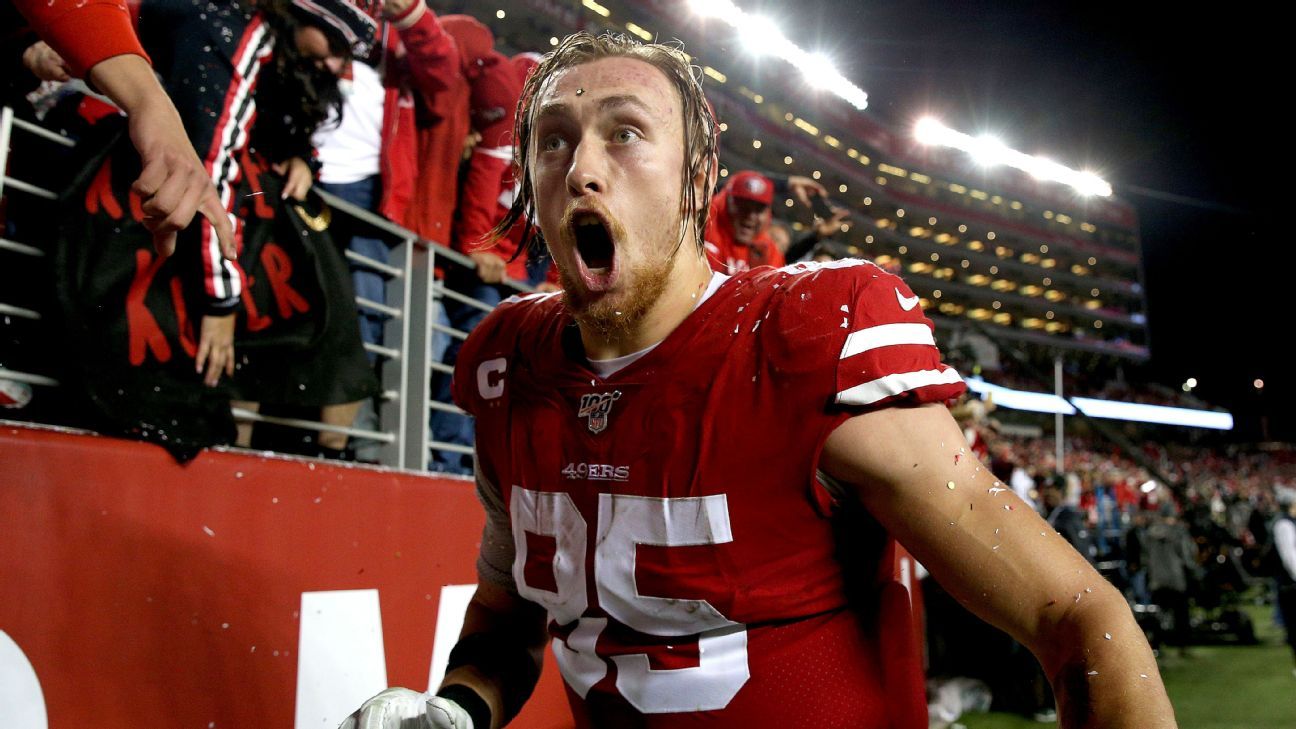 SANTA CLARA, Calif. — As one of the founding fathers of “National Tight End Day,” George Kittle has always served as a strong advocate for his position.

Whenever he has been given the opportunity, Kittle has trumpeted the accomplishments of tight ends all over the league and done his best to ensure they aren’t overlooked when talking about the most important positions in the league.

Despite those efforts, acknowledgement of tight ends still lagged behind when it came to one significant area: compensation.

So, it was only fitting that Kittle changed all of that on Friday when he signed a record-shattering five-year, $75 million contract extension with the Niners that makes him the highest-paid tight end in NFL history.

Kittle’s deal dwarfed the previous record long-term deal for the position — the four-year, $42 million deal Austin Hooper signed with the Cleveland Browns in March — and the highest value for a season, which was held by the Los Angeles Chargers’ Hunter Henry, who is playing this season on the one-year franchise tag of $10.607 million.

Soon after Kittle’s deal was agreed to, the Kansas City Chiefs took care of their superstar tight end, signing Travis Kelce to a four-year, $57.25 million extension, which comes out to about $700,000 less in average annual value than Kittle’s deal but still easily surpasses all other previous tight end deals.

Speaking to Bay Area media Saturday for the first time since signing the deal on Friday, Kittle might have even broken a bit of news, indicating that Eagles tight end Zach Ertz is next up for a lucrative extension.

“I think overall tight ends are occasionally forgot about or not advertised enough,” Kittle said. “And I think the fact that guys are exploding through the ceiling that was set with me, Travis Kelce got a fantastic new deal, I know Ertz is about to get one and the guys that are just blowing through that, it’s fun to see and I think tight ends will just continue to prove that we’re worth a lot to the team.”

Of course, getting to the point where he could shatter that tight end ceiling wasn’t so easy for Kittle and the Niners. The two sides began discussing an extension after Super Bowl LIV, but the COVID-19 pandemic and its potential impact on future NFL salary caps complicated matters dramatically.

The two sides hit pause on those talks until this summer, when the league set a 2021 salary cap floor of $175 million, which could still be higher based on possible additional revenue earned this season.

When discussion of an extension started back up, it was clear the Niners wanted to make Kittle the highest-paid tight end ever, but the question remained by how much. Since the 49ers still had Kittle under contract and could have tagged him for the following three years, they maintained leverage but also wanted to be sure to send the right message to their locker room by taking care of their best player.

It didn’t hurt that 49ers general manager John Lynch offered a unique point of view as a former player who was once in shoes similar to Kittle’s. Lynch was long one of the game’s best safeties but often found himself wondering when his position would be compensated at a level more in line with other positions.

“I think I had an interesting perspective personally because I played a position that had lagged behind in terms of getting paid and I felt like the position and the nature of the position had changed,” Lynch said. “At one point, I became the high-water mark at safety for about 24 hours before Brian Dawkins did. You also kind of feel a responsibility to the game to the other players at your position, and so I knew we were dealing with some interesting dynamics there.

“It wasn’t an easy negotiation, but everybody stayed positive and resolute through the whole thing that we were going to find a way to get it done.”

Despite those challenges, the discussion between the two sides never became contentious as they worked toward finding what Lynch would often refer to as the “sweet spot” that would make both sides happy.

Kittle, who owns the NFL record for receiving yards by a tight end in his first three seasons (2,945), didn’t skip any offseason meetings, reported for training camp on time and maintained faith that a deal would get done before an unofficial deadline of the team’s first practice.

Upon reporting for camp, Kittle sat with Lynch and coach Kyle Shanahan, which reinforced his belief that all three parties were on the same page. Sure enough, the sides agreed to the deal on Wednesday, Kittle signed on Friday and he was on the field for Saturday’s initial 49ers practice.