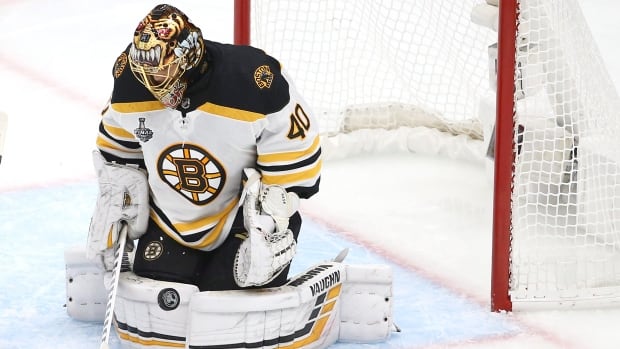 Boston Bruins goaltender Tuukka Rask has opted out of the NHL playoffs.

The team announced the change on Twitter on Saturday morning, less than two hours before their third game in their series against the Carolina Hurricanes.

“I want to be with my teammates competing, but at this moment there are things more important than hockey in my life, and that is being with my family,” Rask said in a statement. “I want to thank the Bruins and my teammates for their support and wish them success.”

The Bruins are currently tied 1-1 in their series against the Hurricanes.

Jaroslav Halak will take over starting goalie duties for the Bruins.

When the NHL first returned to play, Rask missed the start of the play-in due to COVID-19 concerns. After reports of a cough, he quarantined for two days in his hotel room before being allowed to hit the ice.

Rask hasn’t been shy about his criticism when it comes to the playoff environment in Toronto. While you’re trying to play as hard as you can, he said, the series “doesn’t really feel like playoff hockey out there.”

“There’s no fans, so it’s kind of like playing an exhibition game,” he said, adding that while there can still be scrums after the whistle, “there’s no atmosphere.”

Don Sweeney, the Bruins’ general manager, said Rask’s comments weren’t related to his departure but acknowledged that he was having a “tough time being away in this environment.”

“This is playoff hockey, let’s make no mistake about it,” Sweeney said during a media availability before Game 3 on Saturday. “Tuukka, in his own right, felt that he needed to be elsewhere rather than being here in this current situation.

“He’s the same goaltender that went to the Stanley Cup finals in a Game 7 last year … and he’ll be the same player when we get up and running again next year.”

Here are Tuukka Rask’s full comments on the atmosphere up in Toronto: <a href=”https://t.co/5qQU4BDA3N”>pic.twitter.com/5qQU4BDA3N</a>

And while Rask didn’t give any indication to the team that he was “absolutely” going to opt out, Sweeney said the decision didn’t come as a surprise.

“The priority for Tuukka at this point and time — and rightfully so — has to be his family, and we support that,” he said, adding that Rask’s family is healthy and safe.

The Bruins goalie has three daughters, one of them a newborn.

Rask is one of three finalists for the Vezina Trophy, awarded to the NHL’s top goaltender. In 41 games in the regular season, he posted a .929 save percentage and 2.12 goals-against average.