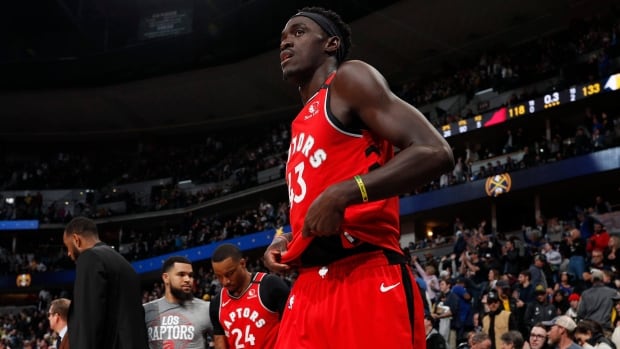 So many roadblocks could have knocked the Toronto Raptors off course on the path toward a repeat.

That’s behind them now. All that’s left is playoff basketball, finding a way to beat their opponent four times.

The Raptors showed last year that they’re really good at that. As long as they play hard, they think they can prove it again.

“If we can do that, we feel that we’re hard to beat,” coach Nick Nurse said. “A lot of things have to go wrong for us to lose a game and then when you kind of multiply that out over a series and four times, we hope that if we’re going to compete and play hard to the level that we can, we should be in there with a chance in any series really. So that’s just kind of how we look at it.”

Seeded No. 2 in the East like last year, when Leonard led them to their first NBA title before leaving for Los Angeles, the Raptors open their first-round series Monday against No. 7 Brooklyn. Toronto rolls into the post-season after going 7-1 in the restart.

The Nets went 5-3 in the seeding games, a strong performance considering the short-handed roster they brought to Disney. Led by Caris LeVert, Joe Harris and Jarrett Allen, the core players who did come, the offence was crisp, the role players stepped up and Brooklyn nearly kept Portland out of the play-in round in its final game.

“This is what we really came down here for, the playoffs, and there’s no moral victories you know what I mean?” LeVert said. “So we’ve got to lock in these next couple of games.”

But the Raptors, with their size, strength and experience, have been a matchup nightmare no matter who plays for the Nets. Toronto has won 18 of the last 20 meetings.

Things to know about their series:

This is the third playoff series between the franchises and the Nets won the previous two, both as the lower seed. They won in six games in 2007 while still based in New Jersey and again in 2014 for their first series victory after moving to Brooklyn, pulling out a Game 7 on the road. Toronto was the No. 3 seed in each series.

Toronto finished the season with five players averaging 15 or more points: Pascal Siakam, Kyle Lowry, Fred VanVleet, Norman Powell and Serge Ibaka. The last team to do that with at least 50 games played for each player was the Buffalo Braves in 1973-74, according to Elias.

LeVert, who scored 37 points in the final seeding game, is the last player to score 30 against Toronto. He also had 37 in the Nets’ Feb. 8 loss and the Raptors didn’t let anyone hit 30 again in their final 19 games.

The Raptors beat the Nets six straight times before Brooklyn’s 101-91 victory in the final game before the All-Star break snapped the Raptors’ franchise-record, 15-game winning streak.

The Raptors are on what might be the NBA’s longest road trip, arriving in Florida in late June. The other teams gathered for workouts at their own facilities before coming to Disney in July, but the Raptors, rather than have their players have to quarantine upon returning to Canada, instead trained for the restart at Florida Gulf Coast University.