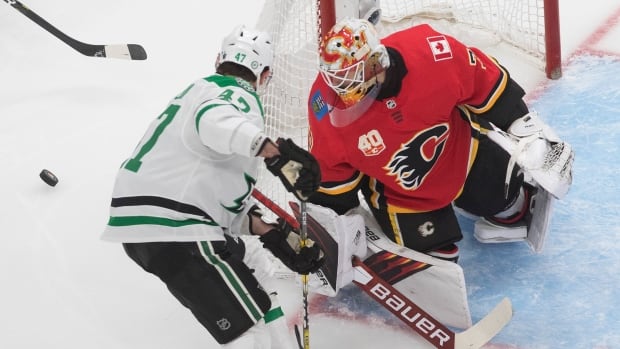 The Dallas Stars blitzed Calgary Flames goalie Cam Talbot with shots early Friday night, and that was just fine by him.

The 33-year-old goalie turned those pucks aside, and everything else that came his way, in a 2-0 shutout of the Stars to give the Flames a 2-1 lead in their best-of-seven first-round NHL playoff series.

“I felt pretty good from the get go,” said Talbot, who logged 35 saves and kept the sluggish Flames in the contest when they were outshot 16-4 in the second period.

“They had some chances early on. I was able to feel the puck and make some saves and gain confidence from there.

“I thought I did a better job controlling the puck tonight, not giving up as many second chances.”

It was the fourth career playoff shutout for Talbot.

“He made some huge saves especially toward the end of the game,” said Brodie.

“Whenever there was a breakdown he was there and he was solid all night long.”

Tobias Rieder, who played with Talbot in Edmonton, added: “If (Talbot) is on his game he’s one of the best goalies in the league.

“He stole games for us there (in Edmonton), too.”

Calgary signed him as a free agent last summer. Talbot started 22 games in the regular season, logged a 12-10-1 record with a .919 save percentage.

He was the understudy to David Rittich during the regular season, but looked better in the exhibition game against Edmonton in return to play action and has played every minute of the post-season.

Game 3 is set for Sunday.

WATCH | Flames coach explains why he went back to Cam Talbot for Game 3:

Cam Talbot was ‘the difference in the hockey game’ according to Calgary’s bench boss Geoff Ward.   4:03

Mikael Backlund and Brodie scored for the Flames.

Dallas goalie Anton Khudobin, making his first start of the series, turned aside 21 shots for the loss.

The teams were playing the second game in two nights. The tempo was slower and there was a lot less post-whistle pushing, shoving, swearing, and face-washing.

After a scoreless first period, Backlund scored his third of the playoffs. He jumped on the puck after Dallas’s Roope Hintz fell down at centre. He cut in on the backhand and managed to roll the puck up and over Khudobin’s pad.

It was the Flames third shorthanded goal of the series.

“I think we’ve been really aggressive this whole tournament on our (penalty kill), especially on our blue line, standing up well, and when the chances have been there we’ve been going after it,” said Backlund.

“We haven’t been cheating. We’ve just been playing within our system and when the chances are there we’ve been going for it.”

Midway through the third period, Brodie fired a slapshot through traffic for the insurance goal, the puck zipping by Khudobin as Calgary’s Derek Ryan fell on top of him, knocking his mask off. The referees determined there was no goaltender interference as the puck had already gone in before Ryan collided with Khudobin.

Stars forward Tyler Seguin, asked to summarize their game, said, “Lot of good looks, just didn’t find the back of the net. A lot of positives to look at.

“Maybe put more shots on net. I think we missed the net a couple of times and I missed high and wide a few times. We got to get some more rebounds.”

Winger Blake Comeau said, “I thought we had a lot of zone time and generated a lot of good looks.

Blake Comeau smashed the glass in frustration after coming off the ice following a scoring chance. 1:30

“There’s obviously a couple of things that we can clean up and I’m sure we’ll look at it and be ready to go the next game.”

The Flames won without Matthew Tkachuk, their top point-getter in the regular season, in the lineup.

Tkachuk (23 goals, 61 points) was out after getting sandwiched between Stars Jamie Benn and Jamie Oleksiak late in Game 2. After the hit, Tkachuk looked wobbly. He returned to the bench, went down the tunnel to the dressing room and didn’t return.