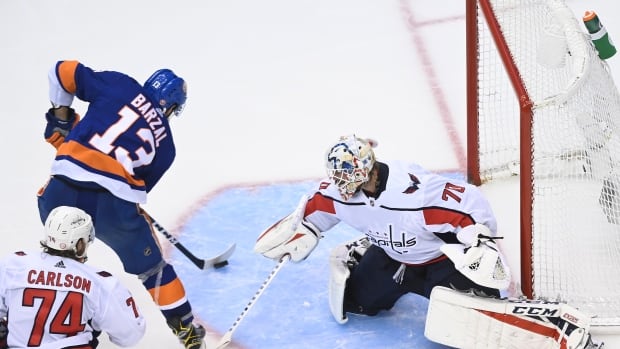 Mathew Barzal scored 4:28 into overtime, lifting the New York Islanders to a 2-1 win over the Washington Capitals in Game 3 of their Eastern Conference first-round series Sunday.

The Islanders are up 3-0 in the series, putting Washington on the brink of being eliminated in the first round for the second straight year after hoisting the Stanley Cup in 2018.

New York’s Anders Lee broke a scoreless tie late in the first period. Evgeny Kuznetsov pulled the Capitals into a tie with a power-play goal early in the second.

Semyon Varlamov stopped 22 shots for the sixth-seeded Islanders. Braden Holtby had 32 saves for the third-seeded Capitals.

WATCH | Barzal puts Islanders one away from taking series:

Mathew Barzal’s second goal in the bubble makes it do-or-die for Washington after their 2-1 overtime loss to New York. 1:43

Lee stayed in his scoring groove in the first period, skating into an opening on the right side of the net and tapping his stick to get the puck. Adam Pelech perfectly placed a diagonal pass on Lee’s stick and he tapped it in to put New York ahead 1-0 with 5:10 left in the opening period.

The Islanders opened the scoring in Game 3 after coming back from early deficits in each of the first two games of the series.

Kuznetsov took advantage of time and space on a power play 5:50 into the second period, sending a wrist shot from the top of the right circle to the back of the net.

The Capitals and Islanders each had a power play during the first half of the third period and failed to take advantage of the chances to take the lead in regulation.

One more angle showing JUST how close Barzal cut it to being offside<a href=”https://t.co/aHtPJx23WY”>pic.twitter.com/aHtPJx23WY</a>

New York finished 0 for 5 on the power play while Washington was 1 of 2 with an extra skater.

The Capitals appeared to start the game sluggish. They were fortunate Holtby was ready to bounce back with a strong performance after giving up four goals in each of the first two games against the Islanders. Holtby faced 14 shots in the first period and gave up only one goal while his teammates got just six pucks on net.

Washington was without Nicklas Backstrom, who is in concussion protocol, for a second straight game.