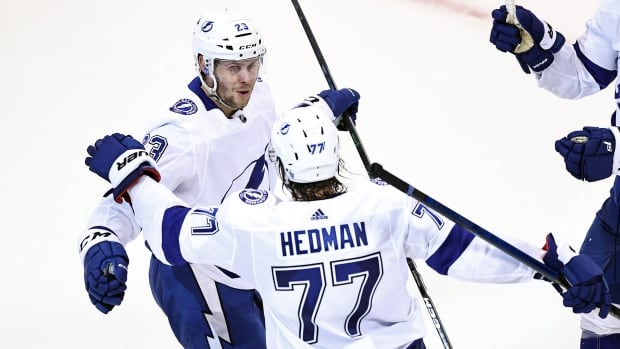 Andrei Vasilevskiy made 16 saves and the Tampa Bay Lightning beat the Columbus Blue Jackets 3-2 on Saturday night to take a 2-1 lead in the best-of-seven playoff series.

Alex Killorn, Brayden Point and Victor Hedman scored, and the Lightning held off a 6-on-5 push late by the Blue Jackets, who could manage only seven total shots in the second and third periods.

“I thought we were very good with the puck today,” Hedman said. “You know we made plays when we had the opportunity. The second and third periods are the way we want to play, and we made it hard on them.”

Riley Nash and Eric Robinson scored for the Blue Jackets, and Joonas Korpisalo made 31 stops after piling up 121 saves in the first two games of the series, including a five-overtime loss Tuesday night.

The Lightning defenceman scored the eventual game-winner to down Columbus 3-2.  1:10

After the Blue Jackets came up empty on over a minute of a 5-on-3 advantage, Killorn made it 1-0 for the Lightning with 4:12 left in the first period when he dragged the puck around diving Columbus defenceman David Savard and beat Korpisalo between the pads.

Nash got his first goal of the playoffs to tie it early in the second. He took a feed from Gus Nyquist just below the blue line and rifled a shot from the left circle over Vasilevskiy’s glove.

Point put the Lightning up again with 5:44 left in the second when he put back a shot that had bounced off Korpisalo. Hedman got his first goal of the playoffs and pushed the Tampa Bay lead to 3-1 with 1:07 left in the period.

Columbus got back within one early in the third when rookie Robinson followed his own rebounded shot and beat Vasilevskiy, picking up his first playoff tally.

“I’m looking back at that second period really impressed with the way the guys played,” Killorn said. “When we’re able to do that for a full period, it gives us a ton of momentum. When they scored early in the third, instead of getting our heads down we just kept playing the same way.”

“They get the second one early [in the third], and I thought, you know, instead of gripping our sticks we played loose and hard, and it was a great way to finish the game,” he said.

The Lightning outshot Columbus 34-17, including 16-4 in the second period.

“Probably for the first time in the series I felt great,” Vasilevskiy said.

Columbus coach John Tortorella said fatigue may be starting to be a factor. The Blue Jackets had to play all five games to beat Toronto in the qualifying series, and then played three games in last five days — starting with the marathon Game 1 that went into five overtime periods.

“I have to figure that’s what happens tonight because it is the whole group of us,” Tortorella said. “From the 12-minute mark of the first period, we’re not the team we need to be in the series.”