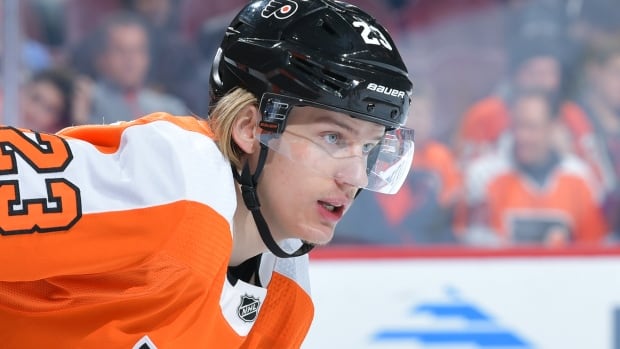 Oskar Lindblom heard the sound of his Philadelphia Flyers teammates tapping the ice with their sticks as he returned to practice and knew — after months of fear and fight in his battle with bone cancer — he was home.

Lindblom turned 24 on Saturday and a day later he received a rousing applause from the Flyers hours before they prepared for their playoff game against Montreal.

A native of Gavle, Sweden, Lindblom was off to a career season when he diagnosed in December with Ewing’s sarcoma, a tumour that grows in the bones or in the tissue around bones. He completed radiation treatments July 2 and weeks later signed a $9 million, three-year contract extension.

No timetable for return

Lindblom said there was no timetable for a potential return to the lineup — the NHL hiatus during the pandemic is the only reason a return this season was possible — and he wasn’t going to rush back.

“I just feel like I need to be strong enough that I can put myself in a situation where I’m good enough to play,” he said. “I don’t want to be out there if I’m not going to help the team or put myself in a tough spot. As long as I feel right, and my body is strong enough, I think I’ll put myself out there. Otherwise, I’ll keep practicing and work myself back up.”

Lindblom had 11 goals and 18 points in 30 games this season and proved a key part early in the Flyers’ resurgence as they earned the No. 1 seed in the Eastern Conference after the NHL restart. Lindblom is a finalist for the Bill Masterton Memorial Trophy, which is awarded annually by the NHL to the player who best embodies the qualities of perseverance, sportsmanship and dedication to the game.

“I think he was real nervous, real excited to be back with the group,” Flyers coach Alain Vigneault said. “The group was obviously ecstatic to have him back even though it was just a morning skate. He’s a great young man, beautiful smile, happy to have him around.”

Vigneault said Lindblom wants to play and as long as the Flyers keep winning, there’s a chance of a comeback.

Lindblom got to ring the bell on July 2 at Abramson Cancer Center at Pennsylvania Hospital, which signified that he had completed his radiation treatments. Lindblom, his girlfriend and the nurses, all in masks, posed for photos and he presented the staff with his autographed No. 23 jersey. The Flyers wore .OskarStrong shirts under their jerseys this season and fans brought signs of support to games at the Wells Fargo Center.

“It’s been everything,” he said. “They talk to me as if I’m still on the team even if I’m not there. Those tough weeks when I felt so bad and trying to think about life, they call me or text me and help me get more energy. It helps me through the whole process.”

He spent time with his girlfriend and family in Sweden and spent time in the required quarantine period after travelling to Toronto where the NHL resumed the season. It was Lindblom’s girlfriend, Alma Lindqvist, that encouraged him to get discomfort in his rib cage checked out. He assumed it was just a hockey injury — but months later, he’s a cancer survivor. And he’s back on the ice with a team that has a chance to win the Stanley Cup.

“To be around the boys, it’s the best thing. I feel great,” Lindblom said.