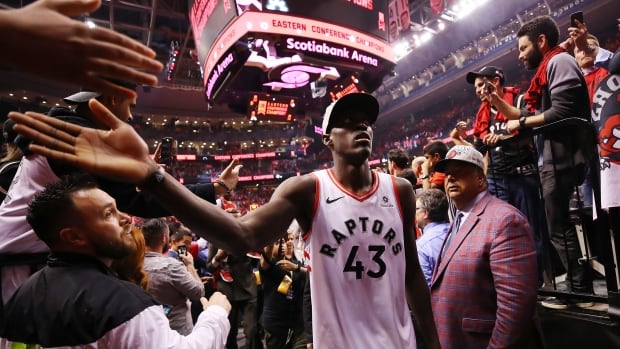 When former Brooklyn Nets guard Deron Williams stepped up to the line for a pair of free throws against the Raptors in Game 7 of the 2014 playoffs, the noise that rose from the then-Air Canada Centre crowd was deafening.

People at floor level that day said they could feel the ground shake.

The Raptors lost that game 104-103 at the buzzer to end a thrilling first-round series. But that series was the beginning of Jurassic Park, Toronto’s fan section outside Scotiabank Arena, and sparked a Raptors fan movement that had spread deliriously from coast to coast by the end of last year’s electrifying championship run.

But COVID-19 has changed all that.

So when the Raptors (53-19) tip off these unprecedented playoffs Monday against the Nets (35-37), there won’t be fans in the arena. Piped-in noise, the squeak of sneakers, Nick Nurse’s barked orders and cheering from the bench will have to suffice.

“We just miss the fans in general,” Kyle Lowry said. “Our fans in Toronto are the best fans in the NBA, I truly believe that. . . and Jurassic Park, the atmosphere, the electricity around the city, the buzz around the city, that’s definitely gonna be missed, and we wish we could have it.”

The Raptors’ fan base exploded last season, with viewing parties and post-game celebrations held in cities from coast to coast. In Toronto, lubricated fans spilled out of bars in merriment that shut down city streets for hours.

The fact Canada had no hockey teams that survived past the first round of the NHL playoffs also helped make basketball must-see sports TV.

But these are unprecedented times. The Raptors released a “movement of millions” promo video on Sunday that reflected these historic times, calling on “heroes, those who work to keep us safe, and those who fight to make a change.”

The coronavirus forced the NBA playoffs into a so-called bubble at Walt Disney World in Lake Buena Vista, Fla., and while the fact there’s been no positive tests is a massive accomplishment, playing in front of no fans just isn’t the same.

Nurse said he’ll miss the crowd’s blood-pumping energy that is always an assault to the senses when he walks on the floor for Game 1.

“The setting is drastically different, we’d be getting ready to play in front of 20,000 roaring Toronto fans [Monday] and we’re not going to,” the coach said. “But I think that our level of interest is very high and our prep was good and I think it feels way more similar than I thought it was going to.”

Nurse is a favourite to win coach of the year after leading the Raptors to a franchise-best winning percentage despite losing Kawhi Leonard to free agency. While he expected to feel the weight of pressure as defending champs this season, he said surprisingly not much has changed.

“The championship still doesn’t seem like a huge burden to carry around that I thought maybe it was going to. Maybe it’s because nobody really expects much from us, ever,” Nurse said. “But that doesn’t matter either . . . you get into it and you know it’s gonna take a lot of plot twists and turns and it’s exciting, this is what we love to do is play these games and get in this fast-paced chess match.”

Toronto Raptors two-way player Paul Watson scored an eye-popping 22 points as the Toronto Raptors ended their regular season with a 117-109 win over the Denver Nuggets. 1:16

Lowry, who was predictably feisty during his Zoom availability Sunday, jokingly flipping reporters his middle fingers before the cameras officially started rolling, said the Raptors have always had the talent, but simply fell short in previous years. Last year’s championship run, he said, was a great lesson in hard work.

“We know what it takes, we know how hard it is, we understand that it is going to take every little bit of effort that you have to get to that point and to actually win it,” he said. “That just helped us with our ability to know, like, ‘Yo, we can do this,’ and this is how hard it is.”

Not feeling loss of Leonard, Green

When Leonard and Danny Green left last summer, it was like the Raptors fell off of the map of NBA relevance. Virtually nobody picked Toronto as a contender this season.

Marc Gasol was asked: Is it amazing what the Raptors have done without Leonard, last year’s Finals MVP?

“I wouldn’t say amazing. It doesn’t amaze me,” the veteran centre said. “The strength of the team [is] the beauty of basketball. . . this is not tennis, we’re not talking about Rafa Nadal or Djokovic or Roger Federer or Raonic, for you guys. We’re talking about basketball. It’s a team effort. It always will be. Doesn’t matter how much we try to singularize the game.”

The Raptors traditionally play poorly in opening games of series, going 4-15 all-time in Game 1s. They opened last year’s post-season with a loss to Orlando but then beat the Magic in four straight. The beauty of the playoffs is in the ability to adapt. And the Raptors, Nurse said, can draw on their talent for remaining even-tempered throughout.

“You understand that — if you really think back — about how up and down all the series are,” he said of last season. “There’s emotion and there’s this and that, and you maybe can handle some of the highs and lows even better. I thought we did a tremendous job of handling that last year.

“[But] I love that thought of attacking one. It doesn’t really matter that we won it last year. That’s done and that’s history. What matters is when that ball goes up [on Monday].”

The Raptors face a Nets squad that has been impressive in the bubble under interim coach Jacque Vaughn. They nearly beat a Portland Trail Blazers team desperately clinging to playoff hopes.

But Toronto boasts the league’s second-best defence and a more balanced offence than Brooklyn, which is missing several of its best players. The Nets’ firepower: Caris LeVert, who’s averaging 18.7 points a night and can score from anywhere.

Lowry said he’s been impressed with LeVert’s confidence in being the “go-to” guy. But he mentioned a half a dozen other players — Joe Harris, Jarrett Allen, Garrett Temple, Dzanan Musa, and Justin Anderson — who pose a threat and are “scrappy as hell and are going to fight their butts off.

“Playoffs is not about one or two guys, it’s about a full team, so who knows, that team, who’s gonna step up. Our job is to go out there and do our gameplan and create what we know how to do.”