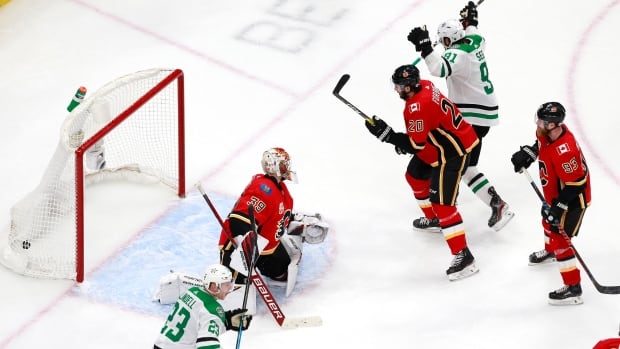 John Klingberg was originally credited with the winning goal that eventually went to Alexander Radulov, but it was the sandpaper grit of Joe Pavelski and an onslaught of shots that got the job done for the Dallas Stars Sunday.

Pavelski registered his first playoff hat trick as the Stars blitzed Calgary Flames goalie Cam Talbot with 62 shots to come from behind and win 5-4, tying their best-of-seven series at two games apiece.

Pavelski did it the hard way and with style, scoring twice on greasy rebounds in front of the net, and once picking the corner of the net while flying down the wing.

“Right from the start in the locker room all the guys were intense. Every guy was ready.

“We went out there and we played pretty direct today. We went after it, and I found myself in some good spots.”

It took Dallas 62 shots on goal to finally send Calgary packing in their 5-4 overtime victory on Sunday. 1:33

The Stars forced overtime when Pavelski knocked in a rebound off a Klingberg shot on a goalmouth scramble with just 12 seconds to go in the third period.

“There’s a lot of confidence, a lot of belief in that locker room,” said Seguin

“It might take a full 60 minutes or change, it’s just our identity. We’re a team that is good defensively and that’s where we get our chances offensively.

“We’ll wait ’til the last second if that’s what it takes to do it.”

It was a back and forth game with multiple lead changes. Calgary winger Johnny Gaudreau chalked up the ending to the breaks of the game.

‘Bad break for our team’

“It sucks,” said Gaudreau, who scored his first goal of the series in the second period.

“[They] tie it late. [We] had a couple of good scoring chances in overtime, didn’t find the net. Bad break for our team (on the winning goal). Guy breaks his stick in the D-zone. They’re stuck out there for 45 seconds to a minute. They’re kind of gassed, and they’ve got a couple of guys in front, Talbs can’t see the puck, and it goes in.

“[We’ll] just put it behind us and move on to the next game.”

Denis Gurianov also scored for Dallas while goalie Anton Khudobin made 36 stops for the win.

Sam Bennett, with two goals, Gaudreau, and Tobias Rieder replied for the Flames.

Pavelski broke the ice late in the first period on the man advantage. Klingberg wristed a puck on net, and Pavelski fought through traffic in front to tuck the rebound past Talbot.

After Gaudreau tied it early in the second, it was Pavelski again, roaring down the right wing on a two-on-one, whipping the puck over a diving Erik Gustafsson and into the net.

Bennett then scored twice: unleashing a blast from the top of the right face-off circle that spun and knuckled past a screened Khudobin, then barrelling down the right side with Milan Lucic. Lucic fired a shot. Khudobin stopped it with his pad, with the puck going right to Bennett, who fired in the rebound.

It was first ever two-goal playoff game for Bennett.

Rieder gave Calgary a 4-3 lead early in the third while shorthanded. He and teammate Derek Ryan chased down a loose puck in the Dallas end. Ryan got to the puck first and delivered a backhand pass to a streaking Rieder in the slot for the redirect.

Rieder has three goals in the playoffs, all shorthanded.

Khudobin, the backup to Ben Bishop in the regular season, started the second straight game for Dallas. Bishop played the first two games, allowing seven goals on 52 shots. He was on the bench for Game 3 but didn’t dress Sunday. Jake Oettinger was the backup.

Calgary’s Matthew Tkachuk’s status is uncertain as the NHL does not release injury information. He was sandwiched between Stars Jamie Benn and Jamie Oleksiak late in Game 2, literally knocking heads with Oleksiak. He skated woozily to the bench, went down the tunnel to the dressing room and has not played since.

Both teams have a lot to work on. Calgary needs to get more help to Talbot. The Stars are averaging almost 37 shots a night against him in regulation time.

Dallas needs to work on special teams. They have given up three short-handed goals to Calgary.

The Western Conference games are being played in front of no fans at Rogers Place, with the players isolating in between to avoid contracting COVID-19.