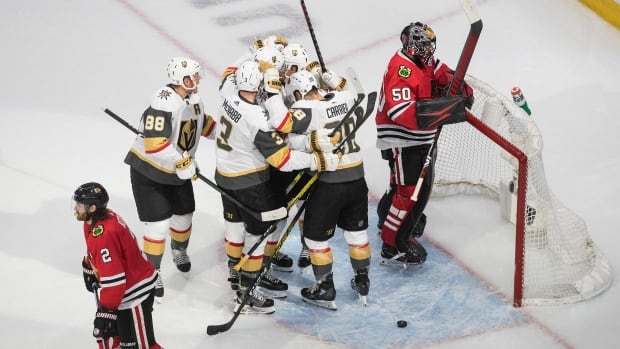 Marc-Andre Fleury stopped 26 shots and the Vegas Golden Knights held off Chicago 2-1 on Saturday night to take a 3-0 lead in the first-round series.

William Karlsson and Patrick Brown scored for the Golden Knights. Vegas is 6-0 in the post-season, having also won all three of its round-robin games in the preliminary round to take the No. 1 seed in the Western Conference.

Fleury had nine saves in the first, seven in the second and 10 in the third.

“He had an incredible game,” Karlsson said. “He almost stole this game for us. Huge saves in the first and also in the third — two periods I thought Chicago was better than us.

The Vegas Golden Knights take a huge 3-0 series lead over Chicago. Patrick Brown’s first playoff goal with the team was the eventual game-winner. 1:03

Fleury gets the nod

With Games 3 and 4 on back-to-back nights, Vegas coach Peter DeBoer opted to start Fleury instead of Robin Lehner, who is 4-0 with 2.39 goals-against average this post-season.

Fleury said he wasn’t thinking about trying to make a good impression to take playing time away from Lehner. Rather, he just wanted to get a win.

“I don’t feel I’m against Robin, I just feel I need to beat [Chicago] and that’s were my focus is at,” Fleury said. “I’m just trying to do my best to help my team get a win here and be 3-zip in the series.”

While DeBoer said his plan all along was to play both goalies on a back-to-back, he wouldn’t confirm Lehner will start Game 4.

Olli Maatta scored in the third period for Chicago, and Corey Crawford had 24 saves.

“We’re down three games and tomorrow is a must win to stay alive,” Chicago’s Jonathan Toews said. “That’s the reality and that’s the way we look at it. We did a lot of good things. We were working for the bounces, pucks were laying around. We just didn’t find the back of the net. Tomorrow we just have to believe that we will.”

Trailing 2-0, Chicago turned up the pressure in the third period, and Maatta cut the deficit in half at 6:21 as the defenceman came up the left side and beat his former Penguins teammate Fleury.

Chicago pulled Crawford for an extra skater with 1:45 to go, but couldn’t get the equalizer.

“The only choice we have right now is not to be frustrated and focus on tomorrow,” Toews said. “If we keep doing a lot of the same things, we still have that belief that we can get a win and we’ll go from there.”