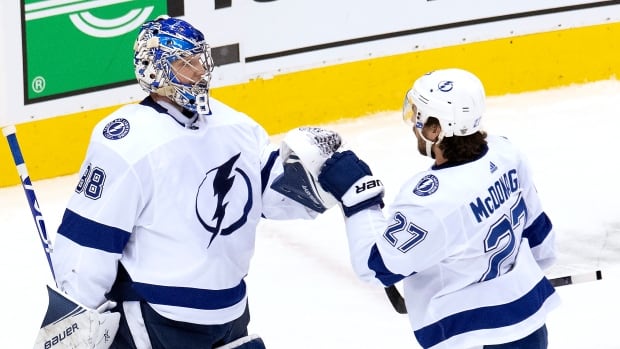 Andrei Vasilevskiy had 28 saves and the Tampa Bay Lightning beat the Columbus Blue Jackets 2-1 on Monday to take a 3-1 lead in their Eastern Conference playoff series.

Barclay Goodrow and Yanni Gourde each had a goal and an assist as the Lightning pushed the Blue Jackets to the verge of elimination after being swept by Columbus in the first round of the 2019 playoffs.

“Every game has been a battle, and I don’t expect any different going forward,” said Lightning centre Blake Coleman, who assisted on Goodrow’s score. “They’re not going to be a team that lays over for us. Being up 3-1 is great, but it doesn’t mean anything if you don’t take care of business.”

Cam Atkinson scored for Columbus, and Joonas Korpisalo had 20 saves.

The Lightning’s 3rd line scored twice in the 2nd period to push Tampa Bay to a 2-1 victory over Columbus in game 4 of their Eastern Conference quarter-final. 0:54

The Blue Jackets seemed to have recharged after running out of gas in the Game 3 loss. They got the first goal early in the first period, but it was waved off because Alexandre Texier was offside entering the zone.

Then the Lightning scored twice in the first five minutes of the second period.

They opened the scoring 16 seconds into the second when Goodrow chopped at the puck in traffic in front of Korpisalo and popped it over his blocker. Gourde made it 2-0 by redirecting a long shot by Kevin Shattenkirk at the 4:09 mark.

Less than two minutes later, Atkinson got credit for the Columbus goal when a long shot by Pierre-Luc Dubois pinballed between Atkinson and the goalie before going into the net. Vasilevskiy argued for goalie interference to no avail.

“The real key is [the last two] games we were up by two, and let up, you know, a goal at pretty crucial times where they might gain momentum off of something,” said Lightning defenceman Kevin Shatternkirk, who had an assist on Gourde’s goal. “And I think we did a great job of resetting, you know, realizing that we have a two-goal lead for a reason, and when it goes down to one we’re still in control.”

‘It’s just one of those things’

Tampa Bay coach Jon Cooper said it was gratifying to see the Gourde-Goodrow-Coleman line finally rewarded for their hard work.

“The one thing is, they set the tone for us,” Cooper said. “They started every game. You know they’re like gnats. I feel like they’re just always buzzing around and you try to knock them away and they just never leave. They put work ethic above everything else. They’re selfless players, and they don’t have an off-switch.”

Columbus took a penalty for too many men on the ice with 1:07 left in the game, which interrupted its late 6-on-5 push.

“There’s no sense being frustrated,” Columbus coach John Tortorella said. “Just get ready for our next game.

“I love our team,” he said. “I like the way they have handled themselves so the whole time out here in the bubble.”

Atkinson said the Blue Jackets played well enough to win. Korpisalo added that it was probably the team’s best game of the series so far.

“I thought we did some, some pretty good things,” Atkinson said. “You can see the pucks bouncing like crazy on a lot of plays. Overall, I thought we played a pretty solid game. It’s just one of those things.”