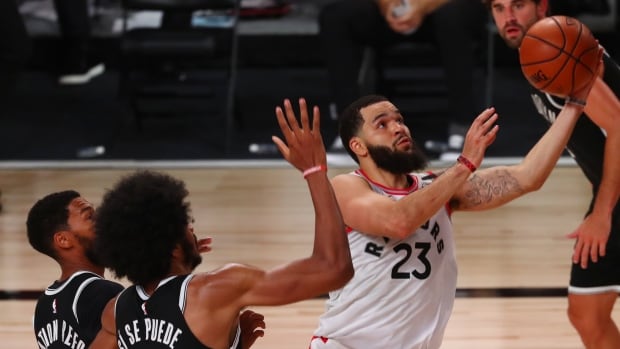 It was an NBA playoff night unlike any other in history — but a familiar result for the Toronto Raptors.

Spurred on by a stirring rendition of “O Canada” sung atop Toronto’s iconic CN Tower, and then introduced via video by their own family members, the NBA defending champions beat the Brooklyn Nets 134-110 in the opening game of their first-round playoff series Monday.

Fred VanVleet had eight three-pointers as part of a playoff career-high 30 points, and the Raptors connected on 22 from deep, matching a season high and setting a franchise playoff record.

“Stating the obvious, [VanVleet] was awesome tonight for sure,” coach Nick Nurse said.

The NBA’s unprecedented restart comes after a four-month hiatus due to COVID-19. While the Raptors would have played this game in Toronto in front of a raucous home crowd, the only fans in attendance Monday at Walt Disney World were virtual. The 300 fan faces on the 17-foot-high video boards conjured images of a giant video game.

Still, the night got off to an emotional start. Both teams knelt with locked arms as Juno Award-winning Toronto singer Jessie Reyez performed a goosebump-enducing rendition of the national anthem while kneeling on the CN Tower’s outdoor EdgeWalk.

“Man, it was awesome. Caught me by surprise,” Nurse said. “I thought the camera and the shots of Toronto and all that stuff . . . kind of took your breath away a little bit.”

Then Raptors’ family members introduced the team’s starters via video. Lowry’s young sons Karter and Kameron introduced their dad with an energetic: “From North Philly to your city, No. 7, Kyle luh-luh-luh-luh-Lowry!”

“It touched a lot of guys’ hearts, I know guys were like ‘Holy crap,’ and they wanted to kind of cry and they wanted to smile at the same time,” Lowry said with a laugh. “That right there shows who we play for . . . It’s just a proud moment for us.”

Fred VanVleet’s new playoff career-high of 30 points helped push the Toronto Raptors to a 134-110 win over the Brooklyn Nets. 1:10

The Raptors then went out and put their stamp on the game, running roughshod over Brooklyn in building a 33-point first-half lead.

“We didn’t really get that playoff atmosphere in terms of [a crowd], but I thought we hyped ourselves up,” VanVleet said. “I thought this is the most locked in we’ve been all year. It felt like guys were amped up and energized. Having won one [the title], it kind of puts you at a peace throughout the year, and now it’s time to kick it into gear.

“I loved our energy, our attentiveness and focus. That’s all you can ask for. We can’t duplicate 20,000 of the best fans in the world.”

VanVleet also had 11 assists with just one turnover, becoming the first Raptor to have 30-plus points and 10-plus assists in a playoff game.

“Oh man, he’s an amazing player and definitely one of my favourite players in the league,” Siakam said of his teammate. “We talk about all the time what we want to accomplish and stuff. Just seeing him doing it on the floor is really amazing.”

The Net made things interesting in the third, slicing the lead to just eight. And when Jarrett Allen hit a buzzer-beat to end the quarter, the Raptors led just 95-86 to start the fourth.

“Everything was rolling, right?” Nurse said. “It’s an NBA game [against] a team that’s been playing extremely well, you know they’re going to make their run a little bit. I was certainly happy to see us answer back once we kind of regrouped.”

Anunoby, who was sidelined for last season’s championship run after undergoing an appendectomy, drew a foul on a driving dunk, and then scored from behind the arc and the Raptors were back up by 17 with 4:26 to play. Ibaka’s three capped an 11-0 Raptors run that extended their lead to 22 points. Both coaches subbed in their benches for the remainder of the night.

“They are champions and have played on a big stage before. Seems like they were trying to deliver an early message to the group, but I did like the way our group responded after halftime and accepted that first punch from Toronto. The rounds will continue,” said Nets coach Jacque Vaughn.

The Raptors had beaten the Nets in three of four regular-season games, their one loss ending their league-high 15-game winning streak.

But a theme this season is that winning an NBA championship is a great lesson in how hard they have to work. Nurse and his staff are wearing bracelets that say “Expect to win!” and “ASO” — short for August, September and October (the NBA finalists will live and play in the Disney bubble until mid-October).

“I wouldn’t say they’re looser, there was a very serious group going out on the floor today, the locker room was pretty quiet, they were focused and I think their play showed that,” Nurse said. “This is where it starts, you have to handle your successes and you’ve got to be able to bounce back from your failures. You have to learn a lot even though you won the game because it’s a long series.”

The Raptors faced the Nets in a thrilling 2014 first-round series that saw the debut of “We the North!” and Jurassic Park, and was the first of seven straight post-season appearances for Toronto. Lowry, who’s shot at the Game 7 buzzer was heartbreakingly blocked, is the only player remaining from either roster.

Lowry set the tone early, knocking down a three for the game’s first points, hurling a long pass to Siakam for a running layup, and taking a charge before the game was five minutes old. The Raptors quickly took a double digit lead and Lowry’s free throws had Toronto up 37-20 up to start the second.

VanVleet, whose previous playoff high was 22 points versus Golden State in Game 6 of last season’s Finals, had four threes in the second, and his long bomb on the run with 4:42 left in the half stretched the gap to 33 points. The Raptors took a 73-51 lead into the halftime break.