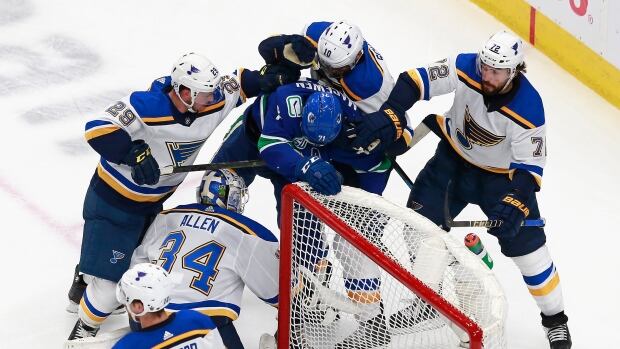 Ryan O’Reilly scored twice and added an assist as the St. Louis Blues defeated the Vancouver Canucks 3-1 on Monday to draw even in their NHL playoff series.

Alex Pietrangelo also scored for the Blues and added an assist. J.T. Miller had the lone Canucks marker.

Jake Allen made 22 saves in net for the win and Jacob Markstrom stopped 34-of-37 shots for the loss.

O’Reilly, last year’s Conn Smythe Trophy winner in the Blues’ Stanley Cup run, scored late in the first period on the power play — the first time the Blues have opened the scoring in the series.

Pietrangelo whistled a slapshot that missed the net, but the puck caromed straight back off the backboards to O’Reilly standing beside the goalpost. O’Reilly elevated the puck from a sharp angle under the crossbar.

Vancouver tied it just 40 seconds into the second period. Alex Edler wristed the puck from the blue line. Miller redirected it and it bounced past Allen for his fourth goal of the post-season.

St. Louis then took control, outshooting the Canucks 17-5 in the period.

O’Reilly took a pass out of the corner from David Perron, walked out in front of the net and flicked a backhander into the top corner for the second two-goal playoff game of his career.

The Blues then caught a break on a two-man advantage. Pietrangelo zipped the puck through traffic in the crease. The puck hit Edler’s stick and in.

O’Reilly has three goals in the series. Perron recorded two assists and has registered a point in every game this series (two goals, four assists).

Allen started for the second consecutive game for St. Louis, replacing Jordan Binnington. Markstrom has played every minute for the Canucks through eight post-season games.

Vancouver captain Bo Horvat was kept off the scoresheet for a second consecutive game after lighting up the Blues for two goals in each of the first two contests.

Canucks defenceman Quinn Hughes also saw his streak snapped. The Calder candidate was going for a point in his seventh consecutive post-season game. The 20-year-old has one goal and eight assists.

St. Louis won without winger Vladimir Tarasenko, who missed his second straight game. The NHL has not divulged the reason. Vancouver defenceman Tyler Myers was also scratched for a second time. He fell awkwardly head-first into the boards late in Game 2.

The Blues’ power play, ranked third in the NHL during the regular season (24.3 per cent), finally got going, with two goals after going 2 for 11 in the first three games.

The Blues have now won two straight after dropping five in a row in return-to-play action.

They lost all three games in the round robin tournament of conference leaders, dropping from first to fourth seed to play the fifth-seeded Canucks.

St. Louis (42-19-10) was second only to Boston in the overall standings, and first in the Western Conference, when NHL regular season play was suspended March 12 due to COVID-19. Vancouver (36-27-6) was 18th in win percentage.

All Western Conference games are being played in front of no fans at Rogers Place. The players are being kept isolated in a so-called bubble between games to prevent contracting COVID-19.