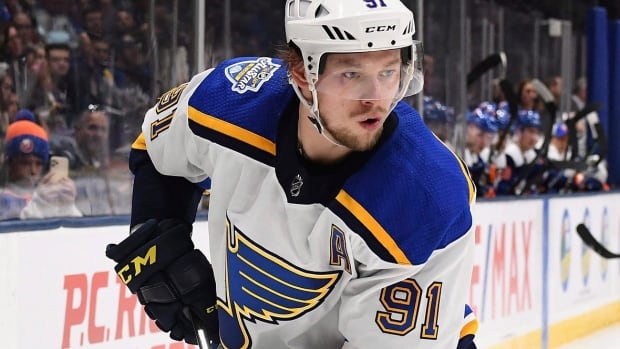 Vladimir Tarasenko will miss the rest of the St. Louis Blues’ first-round series against the Vancouver Canucks after aggravating his surgically repaired left shoulder.

The team said Tuesday that Tarasenko is returning to St. Louis to have the shoulder looked at by team doctors. His status will be updated Monday, which is scheduled to be the day off before the start of the second round.

Tarasenko missed Games 3 and 4, which the Blues won to tie the series. Game 5 is Wednesday.

“He’s not feeling right, and so that’s why he’s going to get it looked at,” coach Craig Berube said. “It’s concerning, but we don’t know a lot yet, so I’m not going to jump to conclusions on anything.”

The 28-year-old Russian winger missed the majority of the season after having his dislocated shoulder operated on in October. He returned to the ice for training camp but had zero points and 10 shots in goal in four games since the NHL restarted and clearly didn’t look like himself.

“For sure he wasn’t full out, but in saying that, I didn’t think there was anything wrong,” Berube said. “I understood why, coming back from surgery and nine months off. … It’s not easy being off that long and coming back and just jumping right into it and being full out. I knew he’d come back and probably ease his way in a little bit.”

The defending Stanley Cup champions played the majority of the season without Tarasenko and were first in the Western Conference when the season was halted in March.

“The way we play, too, is pretty simple and everybody plays for each other and we work hard,” said winger Jacob de la Rose, who took Tarasenko’s spot in the lineup. “Blues hockey is get pucks deep, play hard, play good defensively and that’s what we’ve been doing here and I feel like that’s what we did all year too during the regular season, so even if we lose guys, it’s easy for a guy like me here coming into the series, too. You know what they expect of you.”

Tarasenko had 11 goals and six assists during the Blues’ title run last year. He had 10 points in 10 games this season before being injured.

Berube isn’t worried about not having Tarasenko for at least the next two games.

“We’re a team,” he said. “We play without players at times because you have to with injuries and different situations that come up. Our team is what makes us a good team. We just rely on each other and different people can come in and take people’s spots and just do the job.”