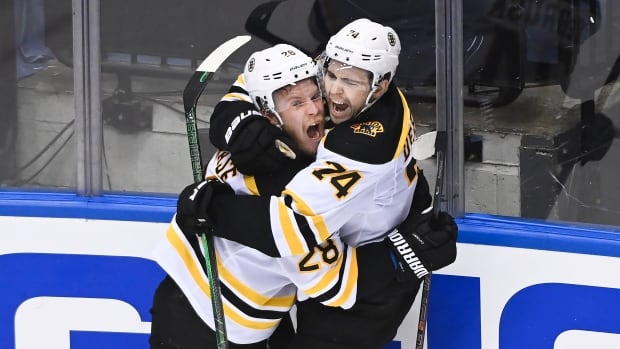 Jake DeBrusk scored twice in Boston’s dominating third period to help the Bruins rally and beat the Carolina Hurricanes 4-3 on Monday to take a 3-1 lead in their first-round playoff series.

Brad Marchand and Connor Clifton also scored in the third, helping Boston erase a 2-0 deficit entering the period. It was a stunning turnaround — complete with the Bruins taking a 16-2 edge in shots on goal in those final 20 minutes — that now has Boston within a win of advancing in a series that looked headed for a 2-2 tie.

Game 5 is Wednesday, with the Bruins having the chance to eliminate the Hurricanes from the Stanley Cup playoffs again after sweeping Carolina in last year’s Eastern Conference final.

Justin Williams and Jordan Martinook scored to give Carolina the 2-0 lead before the Bruins ran off four straight goals, while Teuvo Teravainen added a goal at 18:33 of the third to bring Carolina within one.

James Reimer made his second start of the series in net for the Hurricanes after Petr Mrazek had started Games 1 and 3, shutting out the Bruins for two period before faltering as Boston took over by relentlessly keeping the puck in the offensive zone. He finished with 29 saves.

Jaroslav Halak finished with 16 saves, though the Bruins made it easy on him in the third by not surrendering a shot until Teravainen’s late goal.

WATCH | Hurricanes’ Svechnikov goes down after tangle with Chara:

Late in their 3-1 loss to Boston, Carolina’s Andrei Svechnikov fell awkwardly before NHL official Kevin Pollock took a puck in the face. 1:16