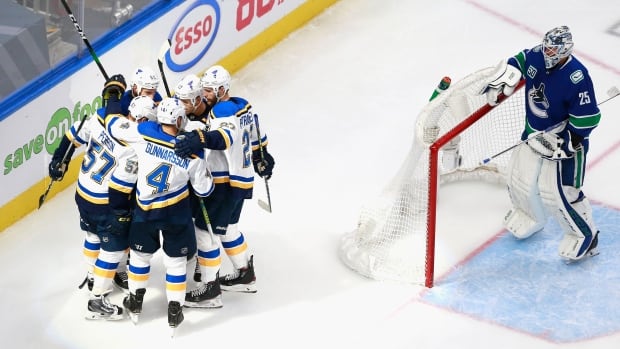 The St. Louis Blues were swerving toward the ditch before Ryan O’Reilly helped steer the defending Stanley Cup champions back on track.

The Blues looked to be on their heels after losing the opening two games of their Western Conference quarter-final series against the Vancouver Canucks. But they regrouped and used wins in back-to-back games to tie the best-of-seven series heading into Wednesday night.

O’Reilly and his line of Jaden Schwartz and David Perron have become the boogeymen who climbed out from under the Canucks’ bed. O’Reilly had two goals, including the winner, and an assist in Monday’s 3-1 victory. In the last two games, the line has combined for three goals and five assists while peppering Vancouver goaltender Jacob Markstrom with a combined 30 shots.

After a slow start, the Blues have found their legs and are playing the style of game they want. A big, strong team, the Blues are limiting the Canucks’ chances, creating turnovers in the neutral zone and playing physical.

“It’s taken a lot longer than we wanted,” said O’Reilly, who won the Conn Smythe Trophy as the best player in last year’s playoffs and the Selke Trophy as the league’s top defensive forward. “There are still some things to clean up.

“We have to be more consistent. We’re going to have to find a way to create more.”

In four games, Perron, Schwartz and O’Reilly have combined for seven goals, eight assists and 45 shots. They have 25 hits and six takeaways.

O’Reilly’s opening goal Monday came on a power play. He took a pass from defenceman Alex Pietrangelo, kicked the puck from his skate onto his stick, and moved to the front of the net where he scored on a backhand over Markstrom’s shoulder.

‘He’s thinking one step ahead of everyone’

It was a pretty play that head coach Craig Berube has watched O’Reilly practice countless times.

“I’m not sure I’ve been around as many guys that work as hard as he does,” Berube said. “There are people who work hard just to work hard. His work is to get better. He’s constantly working on little things on the ice in practice.”

At six-foot-one and 216 pounds O’Reilly has speed, isn’t afraid to get his noise dirty, and has won over 60 per cent of his faceoffs. He matches his skill with hockey smarts.

“His intelligence as a hockey player is outstanding,” Berube said.

Canuck defenceman Chris Tanev said O’Reilly is like a chess player on the ice.

“He’s thinking one step ahead of everyone out there,” Tanev said. “He does everything from faceoffs to winning board battles to scoring goals.

The Blues appear to have solved the riddle of the Vancouver power play. In the first three games the Canucks were six-for-11 with the man advantage. In Game 4 they were 0-7.

“We couldn’t get in and set up,” said Vancouver forward J.T. Miller, who scored his fourth goal of the playoffs Monday. “They are blocking a lot of shots. They are studying us, they kind of know what we are doing.”

Defenceman Alex Edler said the Canucks needs to be smarter when they get control of the puck.

“The big thing for us is clearing the puck when we have the opportunity,” he said.

The Blues have also done a good job shutting down some of the Canucks’ best players. Vancouver captain Bo Horvat had two goals in each of the first two games but hasn’t scored since. Brock Boeser hasn’t scored in five games while Tanner Pearson has one goal in the last four.

Injuries are affecting both teams.

Blues’ winger Vladimir Tarasenko, who missed most of the regular season with a shoulder injury, has returned to St. Louis after missing Games 3 and 4.

The Canucks are also without defenceman Tyler Myers and forward Tyler Toffoli.

Vancouver coach Travis Green said his team may be a little bruised but is far from beaten.

The Canucks lost Sunday’s game 3-2 in overtime. A different bounce and they could be leading the series 3-1.

“I don’t think anyone thought we were going to come into this series and St. Louis was just going to roll over,” said Green. “I expect every game to look a lot like the first four where it’s a fine line between winning and losing.

“We’re not going anywhere. We’ll be back to play the next game.”