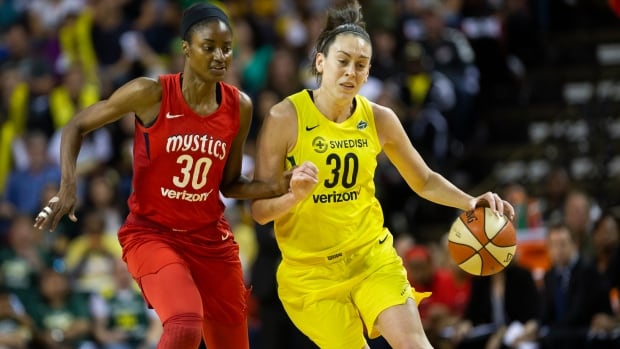 The WNBA has reached its midway point and its clear that the Seattle Storm are the team to beat.

Seattle, led by Breanna Stewart, is outscoring its opponents by 13.1 points a game and jumping on them early by building nearly a seven-point lead after the first quarter. That number has been even higher this month with opponents being outscored by 8.3 points in the opening period in August.

“Everybody wants a piece of us,” said Stewart, who is averaging 18.9 points and 7.5 rebounds. “We’re continuing to show up and be ready. We’re not taking anybody lightly.”

Seattle has the stingiest defence in the league, allowing just 73.3 points a game and the team is third in scoring at 86.4. The Storm are still the unanimous choice atop the power poll.

1. Seattle (10-1): The Storm are off to the best start in franchise history after 11 games and now seem to have more options with Natasha Howard rounding into playing shape. She had her first double-double of the season in a rout of Connecticut on Sunday.

2. Las Vegas (8-2): Seven consecutive wins, including the last three by double digits, have vaulted the Aces to second place in the standings.

3. Los Angeles (7-3): The Sparks have been getting contributions from several players, including Riquna Williams, who is a leading candidate for sixth woman of the year. She’s shot nearly 60% from the field, including going 17-for-28 from behind the 3-point line, during the team’s four-game winning streak.

4. Minnesota (7-3): The Lynx could be without star centre Sylvia Fowles for awhile after she re-aggravated a calf injury. Canada’s Bridget Carleton is developing into a star with the team.

Chatham, Ont. native Bridget Carleton spoke about her first WNBA start and how she was able to set a new career-high with 25 points. 1:52

5. Chicago (7-4): The Sky got Stefanie Dolson (bone bruise) back this week and now have more depth in the post.

6. Phoenix (6-5): Diana Taurasi returned from a lower back injury and now the Mercury will try and get more consistent on the defensive end. They are giving up nearly 86 points a game — fourth worst in the league.

7. Connecticut (4-7): Three straight wins have put the Sun back into the post-season mix. Connecticut has been buoyed by the strong player of DeWanna Bonner and Alyssa Thomas as the team won three of four last week.

8. Indiana (4-6): The Fever have a tough part of their schedule coming up with four of their next five games against Seattle and Chicago.

9. Dallas (4-7): Marina Mabrey started her first game on Sunday and helped the Wings win for the second time in the past seven games. She scored 17 points had four rebounds and two steals to complement teammate Arike Ogunbowale’s 33-point effort.

10. Washington (3-7): The banged up Mystics have dropped seven consecutive games after starting the season 3-0. They had to get an injury hardship waiver to sign Stella Johnson.

11. Atlanta (2-9): The Dream hope to potentially have stellar rookie Chennedy Carter back soon as they try to end an eight-game losing streak. Carter sprained her ankle last week.

12. New York (1-9): Despite not having many wins, the Liberty continue to play better. Rookie Jazmine Jones has scored in double figures in the past three games coming off the bench.