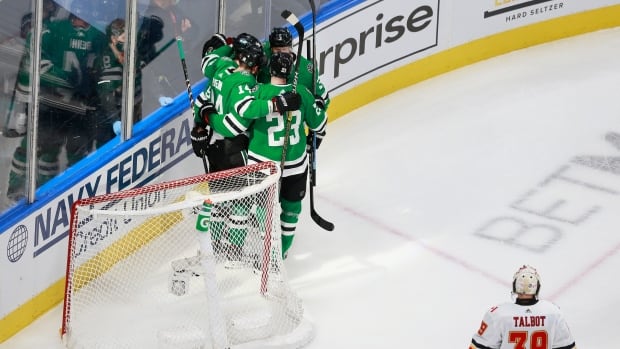 The Dallas Stars delivered a signature game Tuesday, grinding down Calgary 2-1 to put them just a win away from blowing the Flames out of the bubble altogether in the Stanley Cup playoffs.

Dallas has a 3-2 lead in the best-of-seven opening-round series. Game 6 goes Thursday.

John Klingberg and Jamie Benn scored for Dallas while Anton Khudobin stopped 28 shots in net for his second win of the series.

It was a game that fit the profile for Dallas in the regular season: tight defence and opportunistic offence for a squad that allowed just 2.52 goals against a game (2nd in NHL) but scored just 2.58 a game (26th).

The winner came early in the third period. Klingberg fired a wrist shot from the blue line through traffic that beat goaltender Cam Talbot high on the short side.

The Dallas Stars are one game away from knocking out the Calgary Flames after a 2-1 game five victory gives them a 3-2 lead in the series. 1:08

It was his first goal of the post-season, to go with six assists. Klingberg credited winger Mattias Janmark, who bounced back from taking a wicked Noah Hanifin slapshot on the ankle in the first period to set up the winner.

“Janmark did a great job picking up the puck on the boards on his backhand, holding on to it and finding me on the weak side,” said Klingberg.

“That’s something we’ve been talking a lot about as a team, trying to get more O-zone [time].

“He took control of the puck, had a guy on his back, and still made a play so I could just walk down and wrist that shot through, and luckily it went in.”

Benn scored the first goal of the game the hard way, barrelling down the ice on a 2-on-1 with Tyler Seguin.

Seguin backhanded a pass to Benn that he redirected at top speed in the blue paint as he freight-trained into the crossbar, knocking the net off its pegs.

It was ruled a short-handed goal but the teams were just coming off 4-on-4 play at the time. Seguin said he thought about shooting but then saw Benn.

“It was an instinctive play,” Seguin said.

“Jamie was going hard to the back post. I think the crossbar got the best of him there. It was a big hit but good goal.”

It was Benn’s second goal of the series, to go with two assists.

Mikael Backlund, with his fourth goal of the post-season, replied for Calgary. Talbot stopped 30 shots in his ninth consecutive post-season start.

Flames winger Andrew Mangiapane said they need to narrow their field of vision for Game 6.

“I still think we’ve got more than what we’re kind of showing here,” he said.

“I think we’ve just got to go out and play our game and I think we’ll be OK.”

Defenceman Rasmus Andersson said it will be a trench battle: “I still think we can put more pucks to the net and just try to work them more down low.”

Prior to Tuesday, it had been Calgary winning the low-scoring games (3-2 and 2-0) while Dallas had triumphed in a pair of 5-4 shootouts.

It was a game the Stars dominated through the first two periods, with Talbot keeping the Flames in it by turning aside numerous high-percentage chances off the rush and from the slot.

Calgary was outshot 14-7 in the first period, but showed signs of life as the game wore on when Tobias Rieder joined Johnny Gaudreau and Sean Monahan on the top line, with Elias Lindholm bumped down to play alongside Mangiapane and Backlund on the second trio.

Rieder has three goals in the post-season — all shorthanded — and has been elevated to the top six in place of Matthew Tkachuk.

Tkachuk, the notorious agitator and Flames top scorer in the regular season, hasn’t played since he was knocked woozy on a hit late in Game 2.

Ben Bishop, the Stars’ regular season No. 1 goalie, did not dress for a second consecutive game. The NHL is not releasing injury information.

It was an emotional day for interim Dallas coach Rick Bowness. He could be seen blinking back tears as he watched a pre-game video tribute to former teammate and friend Dale Hawerchuk, who died Tuesday after a battle with stomach cancer at 57.

Bowness both played with and coached Hawerchuk in the 1980s with the Winnipeg Jets.

“One thing I remember with Dale, when he bought his first house, I think he emptied the pool and painted a Winnipeg Jet logo on the bottom of the pool right away.

“He was very proud to be a Winnipeg Jet.”

All Western Conference games are being played at Rogers Place, with players isolating in a so-called bubble in between to prevent contracting COVID-19.