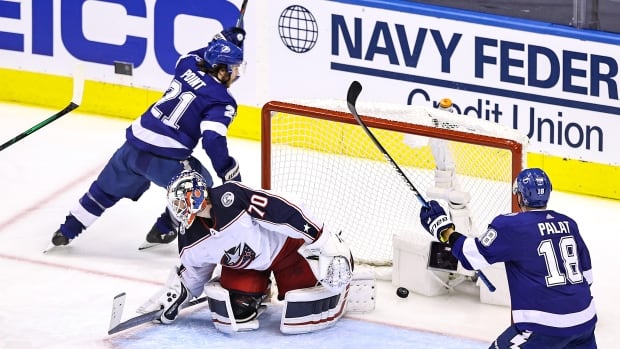 The Tampa Bay Lightning eliminated Columbus from the Stanley Cup playoffs in five games on Wednesday, rallying from a two-goal, third-period deficit before beating the Blue Jackets 5-4 on Brayden Point’s goal 5:12 into overtime.

Point also delivered the winner in Game 1 of the best-of-seven series, a five-overtime thriller that wound up being the fourth-longest game in NHL history.

Kevin Shattenkirk and Anthony Cirelli scored in the final eight minutes of regulation to wipe out a 4-2 deficit. Earlier, Columbus scored four consecutive times to overcome an early two-goal deficit of its own.

Andrei Vasilevskiy stopped 37 of 41 shots for Tampa Bay, which was swept from the first round by the Blue Jackets last season.

“We had 422 days to think about it, but who’s counting,” said Lightning coach Jon Cooper, who insisted heading into the series that redemption was not his team’s mission because both clubs have changed since last season.

“We want to advance regardless of who we’re playing,” Cooper said. “It just turned out we got a second chance, and often times you don’t get that.”

Joonas Korpisalo had 20 saves for Columbus. Point took a pass from Nikita Kucherov in the slot before backhanding the game-winner past the Blue Jackets goaltender.

“Once we went down by two goals … everybody still had the confidence we could get it done,” Shattenkirk said.

In his daily recap, Rob Pizzo tells you what team stayed alive, what team is leaving the bubble, and pays tribute to Dale Hawerchuk. 2:59

Tyler Johnson and Blake Coleman scored within a 61-second span to give the Lightning an early 2-0 lead that Columbus answered with goals by captain Nick Foligno, playoff newcomer Kevin Stenlund and Alexander Wennberg, who put the Blue Jackets ahead 3-2 with 15.8 seconds remaining in the second period.

Oliver Bjorkstrand’s third goal of the series made it 4-2 early in the third. Tampa Bay rallied, with Shattenkirk beating Korpisalo from the top of the right circle and the Lightning pulling even when the puck glanced off Cirelli’s left skate into the net with 1:38 remaining in regulation.

“I thought for the most we played a really, really good game, dictated the whole play, had a lot of chances, guys were feeling it,” Blue Jackets forward Cam Atkinson said.

“But they’re just a team that if you take your foot off the gas pedal they are going to get their chances,” Atkinson added, “and they’re going to capitalize.”

All five games were decided by one goal.

“You know what guys, I’m not going to get into the touchy-feely stuff and the moral victories and all that,” Tortorella said before ending his postgame interview session. “You guys be safe.”