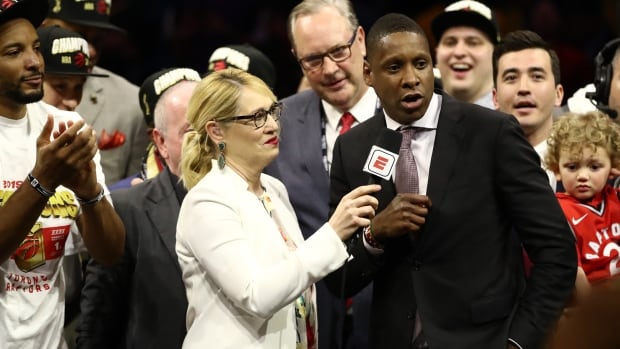 The footage was first released by FOX KTVU 2 on Tuesday night and later confirmed by the CBC News.

The video shows Ujiri attempting to walk on to the court after the Raptors’ 114-110 Game 6 win over the Golden State Warriors at Oracle Arena in Oakland, Calif.

Strickland uses his arm to stop Ujiri in an apparent effort to ensure he had security credentials. As Ujiri tries to walk by, Strickland shoves the 50-year-old before the two appear to exchange words. Strickland then shoves Ujiri again, at which point Ujiri retaliates by pushing Strickland back.

The altercation is broken up at that point by bystanders. Ujiri is escorted to the court, where he’s met by Raptors guard Kyle Lowry.

In a statement Tuesday, the Raptors continued to support Ujiri.

“We are mindful this remains before the courts, but we have always maintained that the claims made against Masai are baseless and entirely without merit.

“We believe this video evidence shows exactly that — Masai was not an aggressor but instead was the recipient of two very violent, unwarranted actions.”

In a document filed in March in a California district court, Ujiri accused Strickland of “forcefully shoving him back once and then twice” as Ujiri attempted to make his way on the court. The document also stated Ujiri only made contact after Strickland’s initial incitement.

“Other than the shoves, the two men did not have any further physical contact with each other,” the document says.

“The entire encounter between Mr. Strickland and Mr. Ujiri was brief. Mr. Ujiri was eventually escorted to the court where he joined his team, accepted the championship trophy and gave a live on-camera interview.”

The document was filed in response to a civil claim filed Feb. 10 by Strickland and his wife, Kelly Strickland, seeking $75,000 US in general damages, as well as other compensation, including punitive damages, lost wages, current and future medical expenses and legal costs.

Strickland alleged that as a result of the altercation, he suffered “injury to his head, body, health, strength, nervous system and person, all of which caused and continue to cause great mental, physical, emotional and psychological pain and suffering.”