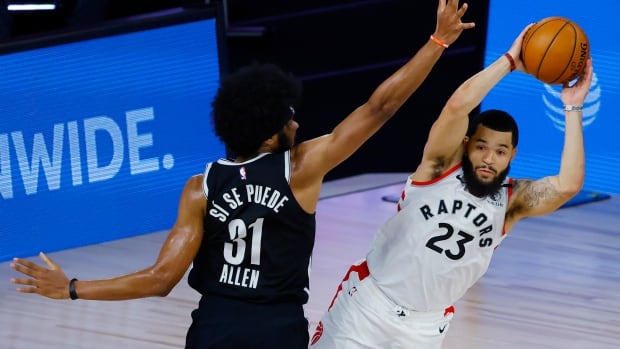 Norman Powell took a pass from Fred VanVleet with a couple of minutes to go in the Toronto Raptors’ narrow victory over Brooklyn on Wednesday, and blew past Jarrett Allen for an uncontested dunk.

VanVleet had called it.

“I told Norm before the game this felt like a Norman Powell game,” VanVleet said afterward.

Powell scored most of his 24 points in a spectacular array of dunks to lift the Raptors to a 104-99 victory over the Nets, and a 2-0 lead in their opening-round playoff series.

“It’s just about focusing on what we’ve gotta do, staying present, staying within yourself, and staying confident in your abilities and taking what the game has given you,” said Powell. “I work a lot on my mental side and staying focused and locked in and just letting the game flow and I feel like in the playoffs nothing else matters, I’m just able to focus in on what we have to do.”

WATCH | Powell, VanVleet pour in 24 points each in Game 2 win:

Norm Powell and Fred VanVleet each put up 24 points as Toronto took a 2-0 series lead over the Nets. 1:07

On an ugly afternoon for the Raptors, they needed Powell, and he delivered off the bench, also scooping up a loose ball for the game-clinching dunk with 5.6 seconds to play.

“He can get hard on himself when he doesn’t play up to his standards,” VanVleet said. “So just [wanted to] stay in his ear . . . he’s probably got an extra 20, 30 inches on his vertical than I do, so I wanted him to attack those same gaps that I [was seeing] and rise up. And he was able to do that with some big dunks and that one in the second quarter in particular was huge for us.”

VanVleet scored 14 of his 24 points in the third quarter in the Raptors’ grind-it-out win. Kyle Lowry added 21 points and nine rebounds and forced the big turnover in the dying seconds. Pascal Siakam had 19 points and six boards.

Two days after putting on a virtual clinic in their 134-110 victory in Game 1, the Raptors laboured for most of the afternoon, particularly on the offensive end against a more energetic Nets team.

The Raptors chased Brooklyn all afternoon and were down by 14 in the first quarter and trailed the Nets 80-74 with one quarter to play.

Raptors coach Nick Nurse said it took most of the game to determine what was causing his team’s breakdowns.

“Is it the coverage, or is it we’re not doing the coverage hard enough, or well enough? Is it a matchup or is that matchup not guarding hard enough?” Nurse said. “So there’s a lot of kind of intricacies there that you’re trying to figure out, and we had to switch a lot of things on the fly, a lot of coverages and a lot of matchups and a lot of stuff because it just wasn’t [working].

Seconds after being whacked hard in the face by Rodions Kurucs, OG Anunoby responded with a big driving dunk to put Toronto up by a point with nine minutes to play. Lowry spun around Joe Harris while drawing a foul, and his three-point play made it a six-point lead — Toronto’s biggest to that point — with 6:44 left. Serge Ibaka’s free throws stretched the difference to eight.

But the Nets wouldn’t go away, and a three-pointers by Timothe Luwawu-Cabarrot had Brooklyn within three points with 40 seconds to play. The Raptors turned the ball over on a shot-clock violation, but Lowry batted the ball away on an intended handoff to Joe Harris near midcourt, which Powell pounced on for a fast-break dunk to seal the victory.

“We got the ball in the hands of our shooter,” Nets coach Jacque Vaughn said. “Good defence by Kyle Lowry. The ball was intended for Joe . . . and got to Joe.”

In the first-to-four-wins chess match of post-season basketball, Nurse said there are benefits to an ugly victory.

“I think this is a really good example of playoff basketball,” he said. “Each game takes a whole different shape. Now I would assume game three’s going to take another one . . . it’s what makes it so interesting and intriguing.”

Siakam has been the Raptors’ No. 1 offensive option this season since Kawhi Leonard left last summer for the Los Angeles Clippers, but there have been questions in Florida about him not performing up his capabilities.

The Raptors coach responds to new video of Masai Ujiri being shoved by an Alameda County sheriff’s deputy. 3:33

His solid game Wednesday made up for the criticism.

And if there are still questions about the Cameroonian forward, Nurse made it clear in his pre-game availability with the media that he’s had enough of them.

“He’s a really good player and he’s going to do his thing, but we like to take what comes to us and not get too bonkers here about that.”

Brooklyn had the Raptors on their heels virtually from tip-off Wednesday, and took a 14-point lead on Allen’s alley-oop dunk from LeVert midway through the frame. The Raptors responded with a 13-0 run to pull to within a point, and then trailed 33-29 to start the second.

A mini-8-2 run put Toronto up briefly by a point in the second quarter, and Brooklyn took a 53-50 advantage into the halftime break.

VanVleet led the way with 14 points in the third quarter, but the Raptors trailed by as many as 10 in the frame.

The Raptors had lost the second game in three consecutive playoff series during last season’s historic run, against Golden State, Milwaukee and Philadelphia.